It seems that the only recipes getting posted this month are those that I’m submitting to blog challenges, and this one is no different.  But I have the excuse that I’m relocating to the other side of the world (in precisely two weeks today!!) so I’m a little bit busy with other things at the moment.  Today’s blog post is no different – it’s my entry to this month’s Breakfast Club, being hosted by Aimée at Food, Je t’Aimée, who has chosen the theme of “January detox” to compensate for all the Christmas over-indulgence.  Now, the thing I associate most with detox is a smoothie.  Probably because it’s usually packed full of fruit and super healthy.  But all the berries that I would normally look for in a smoothie are completely out of season and I really don’t like smoothies for breakfast anyway, mostly because I get hungry about an hour later.  So, I decided to go for something vaguely healthy but filling, which is always good, because it means you don’t snack before lunch.  And what could be more filling and wintery than porridge?

Using skimmed milk makes this porridge a little healthier, and the banana is a portion of fruit, which is always good.  The hazelnuts add a lovely little crunch, plus nuts are healthy (can you tell that being healthy isn’t my strong point?  Ya, nuts are healthy, there’s fruit, use skimmed milk: totally counts as a detox!).  If I’d been really organised, I could have tried this out for breakfast yesterday and posted it for Burns Night, since porridge is vaguely Scottish and all (as are bananas, ahem.  In some alternate universe…).  It would have been slightly less of a tenuous link than my honey, lemon and chocolate muffins for Chinese New Year.  But I wasn’t organised, and plus I’m not really a fan of Burns Night.  Well, that’s not really true, it’s an excellent excuse for a dinner party, but other than that, I’m not really going to go out of my way to celebrate it.  Anyway, I digress.  This made a rather delicious breakfast – porridge might not be your first choice for a detox, but at least you won’t be snacking before lunch, and it’s not a fatty or super-sugary breakfast either.  And it’s important to have a proper breakfast to start off the day anyway! 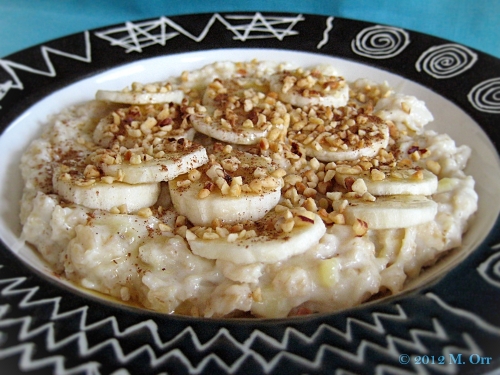 I used whole milk, but skimmed or semi-skimmed milk would work fine as well if you want to make the porridge slightly healthier.  Adding raisins or seasonal fruits at the end would work well, too, and up the fruit content.  Everybody likes their porridge to be a different level of sweetness, so the honey will be very much to your taste.

2.  Add the oats and milk to a small saucepan, along with half the sliced banana and simmer over a gentle heat, stirring occasionally (apparently stirring anti-clockwise brings bad luck – I haven’t tested the theory, but you’ve been warned, duhn duhn duhn…) until thickened to your liking.

3.  Remove from the heat, pour into a bowl, top with the remaining banana slices, a drizzle of honey, the chopped hazelnuts and a light dusting of cinnamon.