When I arrived in New Zealand, I was surprised to discover that sweet potatoes were actually a staple in the Māori diet before the arrival of European settlers.  Consequently, they remain popular here and although it seems that the traditional kumara varieties have mostly been replaced with imported varieties that grow bigger and produce more, they are still referred to by their Māori name, kūmara (pronounced KOO-mah-rah).  Orange kumara seems to be the same variety as orange sweet potato that you find in the US or Europe, but we have two other varieties here that I don’t think I’ve seen before: red and golden.  The three varieties differ slightly in their flavours and their levels of sweetness, with orange being the sweetest (and mushiest when cooked, it seems), and red the least sweet. 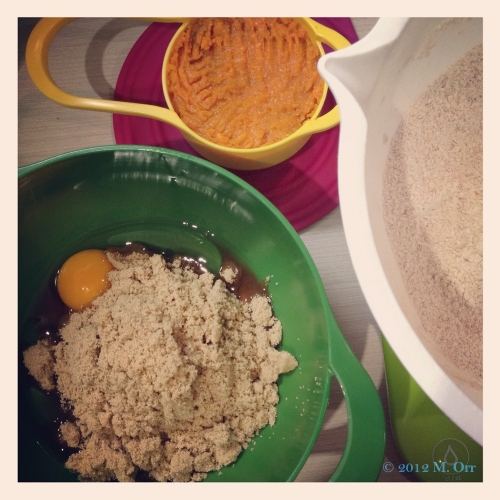 Given the popularity of kumara and its long-standing availability in NZ, I was expecting the batch of orange kumara and chocolate cookies that I took into the lab the other day to be fairly run-of-the-mill.  Not in terms of taste, since they were rather scrumptious, but I mean the combination of kumara and chocolate, in a cookie.  How wrong I was…  It turns out that kumara is only really used in savoury dishes here, so the concept of using it in cookies just about blew the socks off my Kiwi labmates.  And my Spanish labmate, who took one home for his wife to taste (although I wouldn’t be surprised if it “disappeared” en route).  Oh and my Italian labmate, who explained he’d only discovered kumara here, because you don’t get sweet potatoes in Italy.  Basically everybody except the Americans and Canadians.  It seems that using sweet potato/orange kumara for baking must be a very North American thing to do – I’ve clearly been influenced by the 4 years of my childhood that we spent in the southern US without realising it!  I was genuinely taken aback by their surprise though, and being able to so unexpectedly introduce (almost) everybody to something new really made me happy, particularly since they liked them.  I predict that more kumara-based baked goods will be making an appearance at the lab… 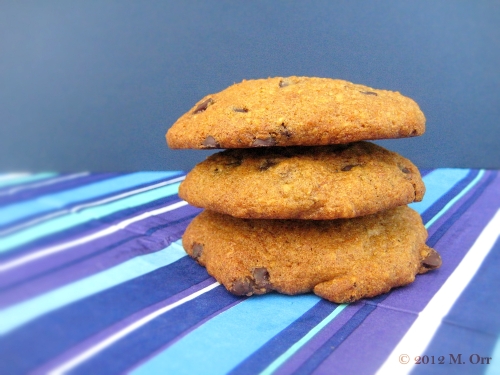 Aside from their secret ability to blow the socks off Kiwis, these cookies are delicious in their own right, and the orange kumara gives them a lovely orange tinge as well.  They’re lovely and soft and pillowy and fantastically moist, so actually, I feel cookie might be a bit of a misnomer since their texture reminds me more of cake than a traditional cookie.  It’s very much like eating cake in the shape of a cookie.  I’m a fan.  Although I can’t help but wonder if there should be an alternative name for them – cakies or cakelets or something.  Any thoughts? Although kumara are perpetually in season (in NZ anyway – in Europe I always thought they were in season through winter), the spices make me associate these cookies with winter: cinnamon, nutmeg and cloves.  Definitely a fabulously wintery combination, and one full of flavour at that! 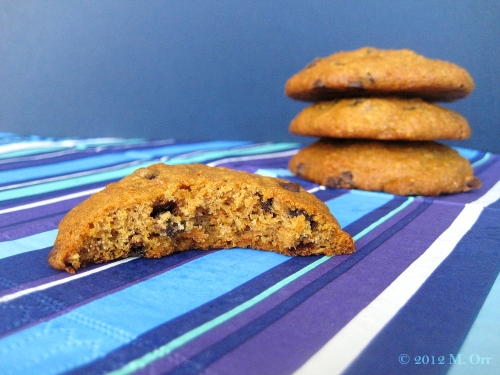 These cake-like cookies are wonderfully soft and pillowy, not crunchy as you might expect from a cookie.  The kumara/sweet potato taste really does shine through, as do the wintery spices.  Make sure to use orange kumara as they are the sweetest and mushiest, so perfect for baking, and they also give the cookies their slightly orange colour.  The cookies will keep for up to 4 days in an airtight box.  Since they’re quite soft, place a sheet of baking paper between layers to prevent them from sticking together.

2.  Scrub the sweet potato and pierce the skin with a fork.  Place on the baking tray and roast for about 40 mins until there’s no resistance when a knife is inserted through the thickest part.  Remove from the oven and allow to cool until it can be handled.  Peel the skin off and roughly mash the flesh in a small bowl with a fork.  Set aside.

4.  In a medium bowl, whisk together the light brown sugar and egg until pale and thickened (it will get pale, I promise – it just takes a bit effort if doing it by hand, as I did – see the photo below).  Gently whisk in the oil and vanilla, then fold in the kumara. 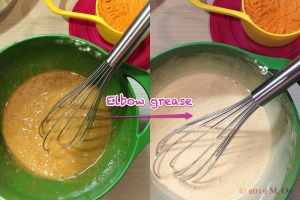 5.  In a large bowl, mix together the two flours, baking powder, baking soda, cinnamon, cloves, nutmeg and salt.  Add the kumara mixture to the flour mixture and fold together with a spatula until the flour is no longer visible.  Fold in the chocolate chips.

6.  Scoop up heaped tablespoons of cookie dough and deposit on one of the prepared cookie sheets, as neatly as possible.  Space the heaps of dough about 5cm apart.  Bake for 10-12 mins until risen and a toothpick inserted into the centre of a cookie comes out clean.  Remove from the oven and leave the cookies on the trays for 10 mins before transferring to a wire rack to cool completely (they’ll still be quite soft so be careful). 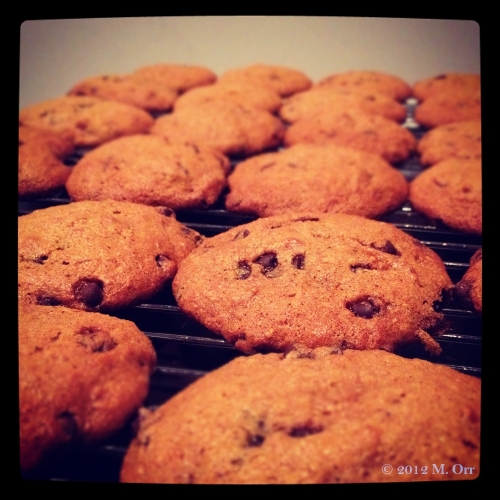 PS – I know I said the kumara gives an orange tinge, but not quite as much as the photo above – that rather over-emphasised colour is courtesy of my minor Instagram addiction (you can find me under sharkyovengloves).

3 responses to “Cookies to blow a Kiwi’s socks off”