What was your first ever cookery book?  Does it immediately spring to mind or do you have to think about it?  Do you cherish it and remember flicking through the pages of exciting new recipes?  Do you still use it?  Are you wondering why I’m asking all these questions?  Well, this month’s Random Recipe has to come from our first ever cookery book.  After a bit of thought, I realised that mine is La Cuisine des paresseuses (Cooking for Lazy People).  Whilst it’s a great little book (full of quick and straightforward recipes – very useful as a student), its main sentimental value is that it was an 18th birthday gift from my French Aunt and Uncle rather than it being the first cookery book that I ever owned.  Before moving to university, I’d always used my mum’s many recipe books and cuttings, and consequently, on reading the challenge, I immediately thought of Je sais cuisiner by Ginette Mathiot, a stalwart of French cookery books.  I’ve flicked through that book countless times, and though I’ll be honest and admit that I didn’t cook that often, I did a fair amount of baking from it, so I’m definitely attached to it.  But I don’t actually own it. 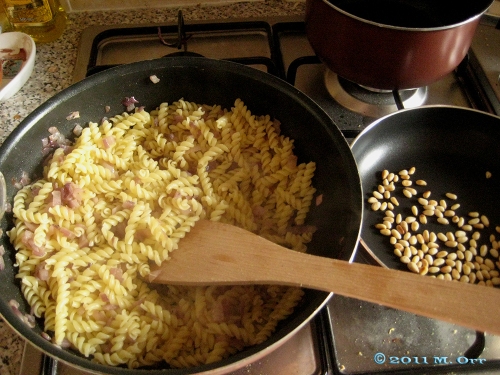 So, cookery book memories aside, I got out La Cuisine des paresseuses.  Although I already used it for last month’s Random Recipe, I’m rather relieved, because as I’ve already mentioned, it’s full of straightforward recipes, and I have a dissertation deadline approaching far too rapidly for my liking, as well as a report and a presentation both due in for tomorrow.  (Before reading the challenge I had visions of having to attempt something insanely difficult from Le Larousse des desserts.)  The random number button on my calculator directed me to page 31, which was a recipe for… a basic vinaigrette.  Now I know I’d been hoping for something quick and easy, but really?  I wasn’t convinced that making a bog-standard vinaigrette quite fitted the idea behind the challenge, particularly since I always make my vinaigrette from scratch, and do so several times a week…  So I took the liberty of hitting the random number button again and turned to page 57: red onion and anchovy pasta.  Definitely sounds like student food… 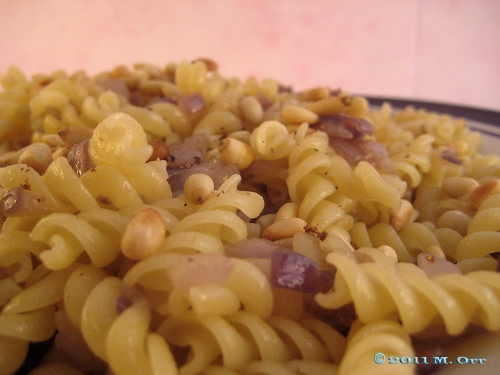 As expected, the recipe was easy and fairly quick to prepare (hurrah!).  Most importantly though, it was tasty!  The red onions caramelised slightly to give a hint of sweetness, but this was counter-balanced by the anchovies, and the pine nuts added a subtle extra little something.  I was a little bit apprehensive about there being no mention of cheese anywhere in the recipe (pasta without cheese is an almost alien concept to me), but thankfully it turned out yummy anyway (which is probably why there was no mention of cheese in the first place – duh!).  My only issue with the recipe was the quantity that I ended up with – 250g of pasta to serve 2?  To be fair, the book doesn’t specify 2 of what – people, lions, elephants, dinosaurs?  With that in mind, it’s definitely one to make again!

When I first made this recipe (thinking it served 2 people) I ended up with loads of leftovers.  Luckily it reheats very well in the microwave (though add a little bit extra oil so that it doesn’t dry out).  I also tried it with parmesan, which didn’t really add all that much to the flavour, so I’d say that’s optional.  If you don’t have any fusilli, any short pasta would work fine.

1.  Bring a pan of salted water to the boil and cook the pasta according to the cooking instructions on the back of the packet whilst preparing the rest of the dish.

2.  Finely-chop the red onion and the anchovy fillets.  Gently fry the onion in the olive oil in a frying pan.  After about 5 mins, add the finely-chopped anchovies and some black pepper and continue frying until the onion has softened, but not browned (I kept mine going on a really low heat until the pasta was done).

3.  Whilst the red onions are cooking, grill or toast the pine nuts for a few minutes in the oven or in a small non-stick frying pan (be careful not to burn them).

4.  Once cooked, add the pasta to the onion and anchovy mixture and mix well.  Split the pasta between plates or pasta bowls and sprinkle with the pine nuts.