I briefly mentioned in my last post that I spent Friday and Saturday in St Andrews, which was my first trip back since the start of the academic year (the trip involving Kat’s killer whale birthday cake was still during the summer holidays).  It was great being back and I had a wonderful time (the puffer fish cake pops that Kat and I made will be making an appearance next Zoosday Tuesday – I hope you’re excited), but at the same time, it felt a bit strange not belonging there anymore.  I really miss St Andrews, and it makes me sad that it’s no longer my home.  I don’t really know anybody in Edinburgh and don’t really feel at home here, which probably makes me miss St Andrews even more.  As a result, my original post for today ended up being a little on the depressing side – I’m not sure what the blog post equivalent of sobbing is, but I think this one was pretty close.  You’ll be glad to know that I’m sparing you from reading that emotional mess and have decided to do a Toothy’s Travels post instead, since I haven’t done one in a while.  I’m keeping with the St Andrews theme though, and using some of the photos that I’ve amassed over the course of four years in St Andrews…

Until the Reformation, St Andrews was the religious centre of Scotland.  St Andrews Cathedral was Scotland’s largest medieval church, and was the seat of Scotland’s most prominent bishops and archbishops.  The site on which it was built had been a place of worship since the relics of Scotland’s patron saint, St Andrew, are said to have been brought there in the 8th century AD.  The Cathedral was sacked by the followers of John Knox in 1559 and is now in ruins, with only a few parts still standing, resulting in an instantly recognisable skyline consisting of the east gable (in the centre of the photo above) and St Rule’s Tower (the square tower on the right). 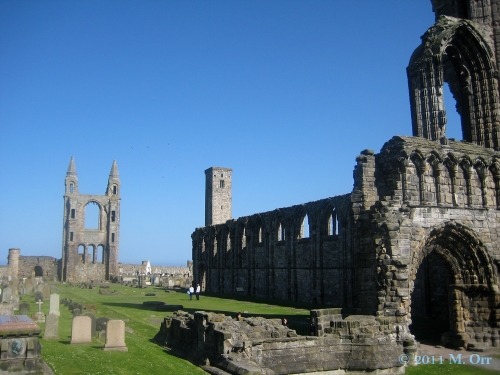 I’ll talk more about the Cathedral in a future post, but today I’m going to focus just on St Rule’s Tower, which was part of St Rule’s Church, the first church in an Augustinian priory.  It was probably built in around 1130, which means that it pre-dates the Cathedral.  The tower is one of the few parts within the Cathedral complex that is still standing, and I’m not sure why it wasn’t completely sacked and hasn’t fallen into ruin.  Perhaps the reformers decided that it would make a useful watchtower or something.  Whatever the reason, it is still standing today, and you can climb it (you can buy the token required to get into the tower from the Cathedral visitor centre).

The tower is 33m high, so there is an uninterrupted panoramic view of St Andrews and its surroundings from the top.  I think it’s definitely worth a climb to see how the town is laid out.  It gives a completely different view of St Andrews and I think it’s fascinating.  There’s a selection of views from the top in the slideshow below.  Seeing the three main streets in the centre of town all lead to the Cathedral really shows how important the Cathedral once was.  West Sands stretches so much further than you expect it to, as do the various golf courses.  If you’re a first-time visitor to St Andrews, the view gives you a good feel for the lay-out of the town.  If you live in St Andrews or know the town well, it’s so interesting to see it from a different perspective and pick out all your usual haunts and favourite places.  I climbed St Rule’s Tower twice during my four years in St Andrews, and both times I was surprised at how funny it is to see the buildings that I was in and out of all the time as suddenly tiny.  I’m clearly easily fascinated… 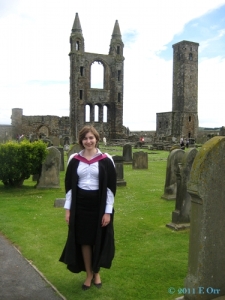 Whilst I would definitely recommend climbing St Rule’s Tower, I should mention that it does involve a fairly narrow spiral staircase used by people going both up and down (although I’ve never actually had to pass anybody on the staircase).  So if you’re claustrophobic or not able to climb up 33m worth of stairs without really having space to stop, giving the tower a miss might be a better idea…  Luckily, there’s plenty to explore within the Cathedral complex if you’re with people who do want to climb the tower.  If you’re there during Graduation Week at the end of June you can people-watch as loads of Graduates get their photo taken amongst the ruins (gosh, who would ever do such a thing as that…?).

Enjoy the rest of your day!