During summer visits to my French grandparents when I was little, I’d always get excited when my grandfather brought in a big bunch of silverbeet (côtes de bette) from the garden.  It meant one thing: silverbeet gratin was in my future.  My grandmother wasn’t exactly an imaginative cook, but in this case, that was absolutely fine by me.  Silverbeet gratin is one of my favourite childhood food memories.  Perhaps because we only ever got to eat it once or twice a year – silverbeet wasn’t available in any of the countries I grew up in – and that made it magical to little Mel.  By the way, this is what I mean by silverbeet:

I think it’s similar to what is called chard in the UK, but I’m not convinced that it’s exactly the same thing.  When my grandmother was no longer able to cook for herself, my yearly summer silverbeet gratin treat was suddenly restricted to my memory.  Until I moved to NZ last year and discovered that silverbeet exists here.  I was embarrassingly excited about it and promptly made silverbeet gratin.  And proceeded to make one a week for about a month.  Just because I could.  (Balanced diet, woop!)

To be honest, this is barely a recipe – it’s literally a case of cooking the stems, mixing them into a béchamel sauce, topping the whole thing off with cheese and grilling it until bubbly and golden.  Boom, simple as.  The recipe quantities are more guidelines than set in stone.  I never usually measure anything out when I make a béchamel, so doing so to write up the recipe was a bit of a novel experience.  I apologise for the slightly uninspiring photos by the way – I was more focused on actually eating the gratin. 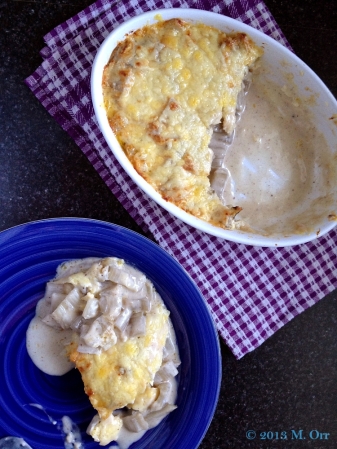 Serves 2-3 as a light meal, 3-4 as a side dish
Recipe by Sharky Oven Gloves

Although the silverbeet leaves aren’t used in this recipe, don’t throw them out – they work interchangeably with spinach in many recipes (although be warned that they are slightly more bitter).  Comté cheese is the best cheese to use, but if you can’t get it (or it’s prohibitively expensive), gruyère will also do the trick.  The gratin can be served as a side dish alongside meat, or by itself as a light meal, accompanied by a side salad.

1.  Wash the silverbeet, trim the leaves from the stalks (you won’t need the leaves, but keep them as they can be used for other things).  Slice the stalks into 1-1.5 cm slices.

2.  Bring a large saucepan of salted water to the boil, add the silverbeet slices and the juice of the half lemon.  Cook for about 20 mins, until a knife point easily slides into the stalks.

To prepare the béchamel:
3.  Pre-heat the oven to a hot grill setting.

4.  Meanwhile, make the béchamel.  Melt the butter in a medium saucepan.  Add 2 heaped tbsp of flour and stir until smooth.  Add more if necessary, but a little at a time, ensuring that it remains smooth.  Stir in the milk about 50ml at a time, constantly stirring and allowing the sauce to thicken before adding more.  Season with salt and freshly ground black pepper and the nutmeg.

5.  Drain the silverbeet, and add to the béchamel sauce (or add the sauce to the silverbeet, depending on the size of your saucepans) and stir together.  Pour into an ovenproof dish, and top with grated comté or gruyère.  Grill until the cheese is melted and browning.  Serve immediately.

Another month, and another food blog challenge that I happen to have discovered…  Now I already participate in three monthly food blogging challenges (Breakfast Club, Mac Attack and We Should Cocoa) and as much as I love my blog and baking/cooking and posting new recipes, well, I am also supposed to be working on a dissertation.  A dissertation, I should add, that is worth a quarter of my final degree classification (no pressure).  So ya, three challenges are quite enough – priorities and all that…

But here’s the thing – we all have cookbooks full of recipes that, despite our best intentions, we never quite get around to trying out.  And Belleau Kitchen‘s Random Recipe challenge addresses exactly that: basically, it involves randomly picking a cookbook and then randomly picking a recipe within it, and then trying it out.  Genius!  So even though I’d decided to draw the line at three challenges, I couldn’t really not get involved in this one, could I?

So for this month, we had to line up our recipe books and pick the 18th from the left, which in my case was a French one, “La Cuisine des paresseuses,” which loosely translates as “Cooking for lazy people.”  It’s a lovely little book that my French Aunt and Uncle gave me for my 18th birthday (were they trying to tell me something?).  It’s full of tasty recipes that are straightforward and reasonably quick to prepare, which as a student, can be really helpful!  So I happily plucked it off the shelf, knowing that whichever recipe I landed on was unlikely to be particularly complicated or time-consuming in its preparation, meaning more time for dissertation-ing (totally a word). 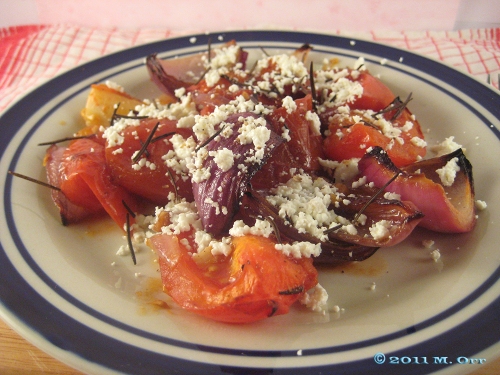 The next step was to pick the actual recipe.  We’re supposed to flick through the book and stop randomly, but well, that’s not a particularly rigorous methodology (I won’t bore you with a mini analysis of the multiple sources of bias), so I had to be all scientific and use my trusty calculator to generate a random page number: page 42.  There were two recipes on this page, neither of which I’d tried before, so I had a choice between a roasted tomato and red onion salad or a tomato, broad bean and basil salad (page 42 happens to fall in the gloriously titled second chapter: “How to make a salad without dying of boredom.”  Could salad be the meaning of life?).  I was most tempted by the first option, because it’s a warm salad and it’s still pretty cold outside at the moment (after all, it is March).  This turned out to be a brilliant choice…!  Not only was it super easy and rather delicious, but it was quick to prepare (5-10 minutes to throw everything together) and I managed to read two papers whilst it was in the oven.  Hah!  Take that, dissertation.

The original recipe suggests either serving this salad as a side dish alongside, for example, fish, or as a starter or lunch with some goat’s cheese crumbled over the top and some good French bread.  I went for the second option, obviously with the added goat’s cheese, which actually works wonderfully because it perfectly balances the ever-so-slightly caramelised onions.  I sautéed the second portion the next day with some couscous (minus the goat’s cheese though) and that was scrumptious, too.  In a moment of sheer Frenchness, I automatically added garlic, even though it isn’t specified, and I also used some garlic-and-rosemary-infused olive oil that I happened to have.

2.  Quarter the tomatoes and onions and scatter them into an oven-proof dish with the herbs (in sprigs), and the roughly hashed garlic.  Drizzle with the olive oil and vinegar.

3.  Bake in the oven for about 1 hour, gently mixing the dish’s contents after 30 mins.  Season with salt and pepper once roasted and remove the herb sprigs and bay leaves (I stripped the leave form one of the rosemary sprigs and sprinkled them back into the salad).  Serve as a side dish or allow to cool slightly before crumbling the goat’s cheese over the top (optional) and serving with some French bread on the side.