Henceforth I shall be known as: Queen Mel (OK, OK, just for one day)

To celebrate the Epiphany (when the Three Kings visited baby Jesus) in France we make a galette des rois, or “Kings’ cake.”  Hidden in the cake, there is a fève (a small porcelain figurine), and whoever gets it in their slice is crowned King or Queen for the day – this is known as the “drawing of the Kings.”  The Epiphany is the 6th of January, but you can get galettes des rois throughout January.

There are countless different types of galettes des rois – most regions have their own speciality versions (as with everything in France).  The best-known type of galette is probably the one made with frangipane and puff pastry, which I made this year for the first time (I usually make one of my regional versions, which is choux pastry-based). 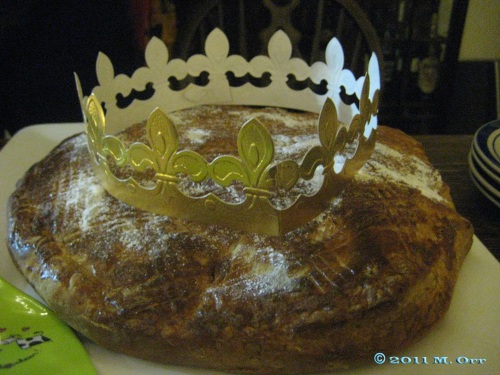 In an attempt to make the drawing of the Kings as random as possible, the responsibility of assigning slices to people rests with the youngest person present.  I remember agonising over which slice I thought was most likely to contain the fève so that I could pick that one and be Queen.  I was usually wrong though.  To ensure the least amount of bias possible, some families make the youngest person sit under the table (so that they can’t see the galette) and yell out people’s names as slices are cut.

This year, I got the lucky slice, so I was crowned Queen Mel for the evening (coincidentally, at the roughly the same time, my blog reached 300 views – I would currently like to think of myself as Queen Mel of Spartaaaaa!  Or not.)  In thanks for being crowned, the King/Queen is supposed to provide next year’s galette des rois.  I think I’ll make a regional version next year, so keep your eyes peeled for that… 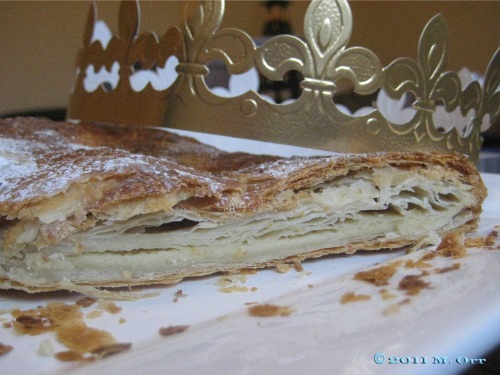 If you’re a big frangipane fan, the quantity can be doubled for an even more creamy filling.  I cheated a little and used ready-made puff pastry (I just didn’t have the time to faff around and make it myself) – for this recipe, it’s easier to get block pastry rather than ready-rolled as it has to be split.  Of course, you can make galettes all year round – just leave out the fève!

2.  To make the frangipane, melt the butter in a small saucepan and transfer to a mixing bowl.  Add the caster sugar and whisk to get a frothy mixture.  Add the ground almonds, the egg, the flour and the rum, and mix well until smooth.

3.  Split the puff pastry into two and roll out both halves into circles of the same size (make sure that the circles aren’t too big to fit onto your baking tray).  Spread one of the circles out onto the sheet of baking paper and prick it all over with a fork.  Spread the frangipane over the disk of pastry up to 1cm from the edge.  Push the fève into the frangipane (near the edge is best.  It helps if you can remember where it is so that when you slice the galette, you don’t end up trying to cut through it – just make sure you’re not picking who gets which slice or that would be unfair!)  Cover with the second pastry disk and pinch the edges of the two disks together, using a little bit of milk if necessary.

4.  Whisk the egg yolk with a drop of water and brush over the top of the galette.  (At this point, you can use a knife tip or a fork to trace patterns over the top and make it look pretty.)

5.  Bake in the oven for 40 mins.  5 mins before the end, lightly sprinkle some icing sugar over the top (using a tea strainer makes it much easier to control and even coverage), and return to the oven.  Serve warm (the galette will deflate when you cut it).