Sunday Smiles: From the edges of the solar system to Eden Park

Not the happiest start to Sunday Smiles but I have to mention it: you guys, Neil Armstrong died.  I totally wanted to be an astronaut when I was little, and although my career dreams and aspirations veered off into the direction of the ocean, a little part of me has always remained fascinated by space, so the news saddened me, in the way that the death of a famous person who did something truly great does.  Neil Armstrong was definitely the person with whom I most associate space exploration.  And the moon.  I still think it’s incredible that humans have walked on the moon.  Fun fact: more humans have been to the moon than to the depths of the Earth’s oceans.

So this week’s Sunday Smiles starts off with something space-related: 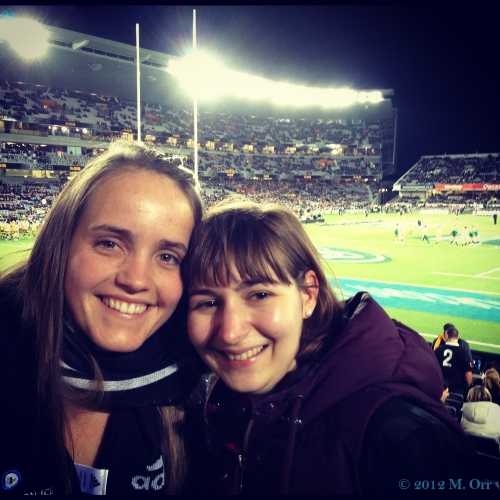 Watching the All Blacks!

Saturday was a day of much excitement – not only was it World Gin Day (which involved Gin & Tonic scones), but I went to an All Blacks game!  I watched the All Blacks play in real life for the first time ever!  And at Eden Park, no less – scene of their victory in the World Cup (we’ll just skip over the details of who they beat, ahem…).  I’ve wanted to see the All Blacks play in real life for as long as I can remember, so this really was a big deal for me.  It was also the perfect occasion to finally  buy an All Blacks shirt, which was quite an emotional undertaking, for personal reasons that I won’t go into.

The game was the first of three test matches that the All Blacks are playing against Ireland over the next few weeks, so not a particularly important game, but I wasn’t particularly bothered about that.  Since it wasn’t an important game, I don’t really think that many Ireland supporters would have flown over for the matches (since you know, it’s the other side of the world and a little expensive to do so), so I was pleasantly surprised by the number of Ireland supporters that were at the game – I had no idea that there were so many Irish here in Auckland.  The game itself wasn’t the most nail-biting rugby I’ve ever watched, and with a final score of 42-10 (to the All Blacks) it wasn’t exactly a case of not knowing who would win until the very end, but it wasn’t bad rugby and Ireland weren’t exactly pushovers.  My general excitement at just being there more than made up for it anyway.

I really like Eden Park as a stadium.  We had seats in the terraces in one of the corners behind the try line, so we got drizzled on a bit, but we were fairly close to the pitch (which is always good), and I think the stadium itself is more or less square, which makes the pitch really wide and gives the impression that the opposite posts aren’t actually that far away.  The only thing that I found a little disappointing was the haka, the notorious Māori dance that the All Blacks do before every match to  welcome their opponents.  This was probably the part that I was most looking forward to.  We were conveniently placed so that the All Blacks were facing us when they did the haka, so we could see what was going on, and they transmit close-ups on the big screens around the stadium (which I imagine is what is being televised), but they don’t seem to have microphones that pick up the sound and transmit it around the stadium.  The haka is significantly less impressive if you can barely hear it.  And I know that the haka is for the “benefit” of the opposing team rather than the spectators, but it’s such an integral part of watching the All Blacks on TV that it seems a shame to lose most of the effect when watching in real life (on the other hand, perhaps having the haka booming around the PA system of the stadium would be a little too terrifying…). 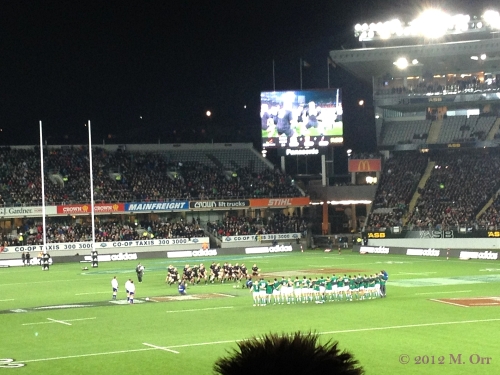 If you’re a rugby fan and ever visit Auckland, I’d definitely recommend checking to see if your trip coincides with any All Blacks games – just the experience of watching the All Blacks play at Eden Park is totally worth it.  I’m afraid I can’t give you any information on acquiring tickets because somebody else organised that.  You can travel by train to Eden Park from Britomart (the train station at the bottom of Queen St) and back again for free with your match tickets.  I’m not sure if this is also the case for other train routes in Auckland since we left from Britomart.

Enjoy the rest of your day, wherever you are in the world!