Do you know what today is?  It’s Sinterklaas!  Which, unless you’re Dutch, have Dutch friends or have spent time in The Netherlands, probably doesn’t mean terribly much, and you can read a brief (and minorly sarcastic) explanation here.  I was born in The Netherlands and have lived there for a few years, and even when we didn’t live in NL we had Dutch friends, so Sinterklaas always featured on my calendar when I was growing up.  My favourite thing about Sinterklaas are pepernoten, which are little biscuits packed full of spices.  They’re amazing.  And they’re really difficult to find outwith NL. 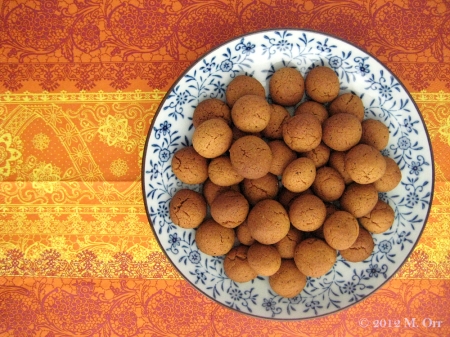 We left NL for the last time when I started uni in St Andrews, and luckily in my first year Keely sent me a massive packet of pepernoten.  But then her parents left NL.  Which meant that my only source of pepernoten was if I made them myself.  And so I turned to my recipe book which contains several different pepernoten recipes pilfered from various Dutch friends, and combined them.  I discovered that pepernoten are actually remarkably easy to make, although rolling all the little balls does make them a little time-consuming (so worth it though, and if you have the time, I’d definitely suggest doubling the recipe from the offset). 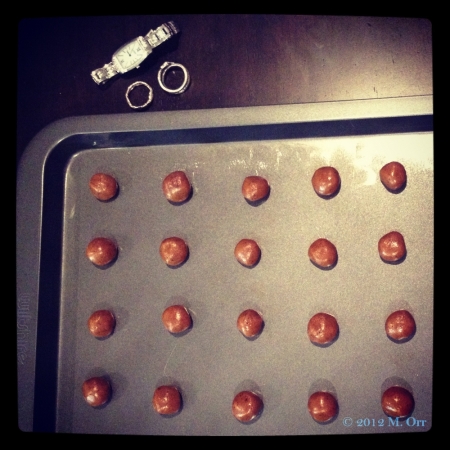 The most crucial part of pepernoten is the spice mix, and in NL you can buy a specific spice mix for them.  I obviously don’t have the special spice mix, but it’s easy enough to make using spices that you probably already have in your spice cupboard.  Incidentally, these are technically called kruidnoten, but most people just call them pepernoten, myself included (so no need to get all pernickety with me).  I make pepernoten every year now and attempt to spread general enthusiasm for Sinterklaas amongst whoever happens to be around to eat them.  Although I don’t go the whole hog and dress up as a Zwarte Piet and throw them at people…  (Although I’m sure the perplexed reaction would be highly entertaining, if awkward.) 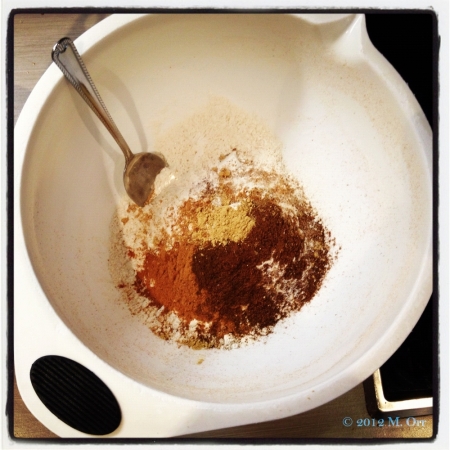 This year my poor labmates fell victim to my general over-enthusiasm for Sinterklaas.  To be honest, they were pretty willing victims because all it involved was scoffing pepernoten.  Which is a remarkably easy task since they’re bite-sized and utterly moreish.  I’ve actually posted about pepernoten before, in my very second post.  I had a look at said post the other day and you can definitely  tell I was new to blogging.  Not that I’m any kind of expert now, but I like to think I’ve improved a little since then (although not in the conciseness department).  So I decided I’d repost the recipe, this time with slightly more detailed instructions, an indication of how many pepernoten it actually makes and perhaps a few better photos. 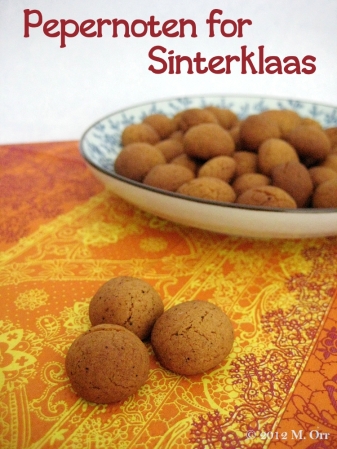 I’d suggest just doubling the recipe from the offset because these are bite-sized and moreish – a dangerous combination!  Dark brown sugar would probably work well instead of light brown sugar, but would result in a slightly more pronounced treacle-y flavour, which isn’t necessarily a bad thing.  Pepernoten are all about the spices, so feel free to be liberal with the quantities.  The aniseed is optional – I’m not a huge aniseed fan so tend to leave it out, because I know I won’t use the rest of the jar, but the aniseed flavour itself doesn’t come through very strongly.  These will keep well for a week or so in an airtight container (they would probably keep longer, but they’re unlikely to stay uneaten for more than a few days anyway).

2.  Add the brown sugar, cubed butter, milk and treacle in a saucepan.  Melt together on a low heat, stirring.  Remove from the heat once smooth.

3.  Mix together the flour, baking powder and spices in a large bowl.

4.  Once the treacle mixture has cooled a little (because enthusiastically plunging your hands into hot treacle just off the stove is not a smart idea.  Not that I’m speaking from experience or anything, ahem), pour it into the bowl and knead together until it forms a smooth, fairly firm dough, adding pinches of salt during kneading.

5.  Pinch of little bits of dough and roll them into small round balls about the size of a marble.  Place them on the prepared baking trays leaving about 1.5 cm space between them.  Bake for 12-15 mins until risen and golden (it’s normal if they look slightly cracked).  Remove to a wire rack to cool completely – they’ll harden as they cool (I find that the pepernoten tend to slip through the wires on my cooling rack, so I usually place one over the top of the other, but perpendicular so that the wires cross over each other and stop any pepernoten from falling through). 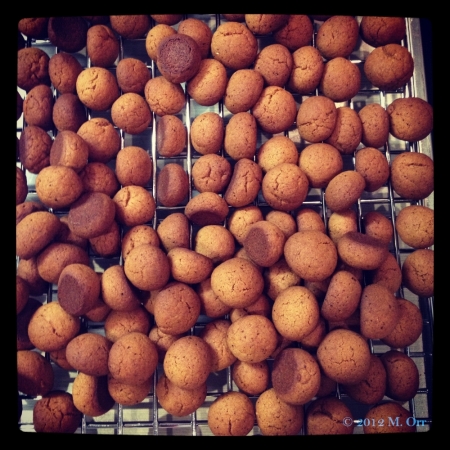 I got all excited last month about the new blog challenge dreamt up by Janine at Cake of the Week: Baking with Spirit (so excited that I entered it twice…).  Apparently I must come across as a bit of an alcoholic since it turned out that Janine expected my enthusiasm – in the September round-up she admitted/confided that she’d hoped the challenge would be “right up my street.”  For the record, that comment amused me no end – Janine clearly knows me remarkably well!  My enthusiasm for the challenge hasn’t abated, and the alcohol of choice for October is… can you guess?  It’s “beer!”  Because, you know, Oktoberfest.  Clever, eh? 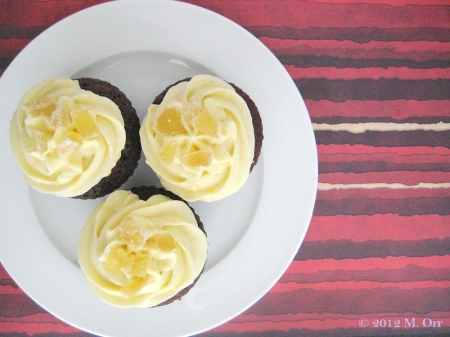 Now, I have a little confession: I don’t like beer.  There are a couple of exceptions – I do quite enjoy fruit beers (although I’m not sure they really count as beer), and I’ve had one or two beers that tasted pretty good for a few sips but then they warmed up too much and the hoppy flavour started coming through too much for me to finish the bottle.  I really wish I did like beer though – I suspect that there’s a lot of enjoyment to be had in good beer and I feel like I’m missing out.  And I don’t like being left out.  I think part of the problem is that I’m not particularly knowledgeable about beer, so I wouldn’t know where to start. 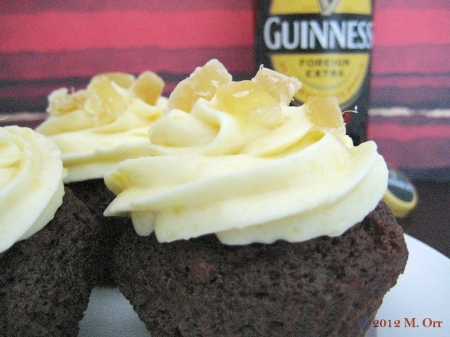 Luckily, Baking with Spirit is about baking or cooking with beer rather than drinking it.  I baked some rather scrumptious chocolate Guinness cupcakes about a year ago, but that’s been my sole foray into baking with beer.  I really had no idea what I was going to make, so I was sort of hoping that something would magically come to me.  And then, a few days ago, I came across a recipe for Guinness gingerbread cupcakes.  Bingo!  The combination of Guinness and gingerbread completely intrigued me – I would never even have thought to pair them together. 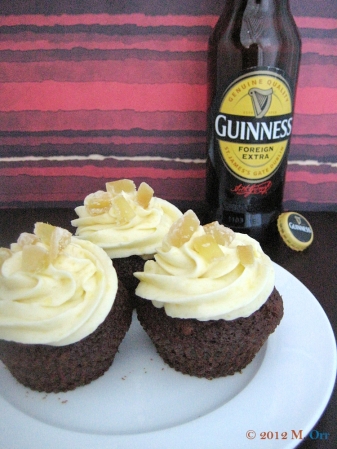 Boy am I glad that I tried the recipe out, because these cupcakes are phenomenal.  It’s a dark gingerbread, packed full of spices, wonderfully gingery and with a fabulous undertone of treacle that is perfectly matched by the Guinness, which comes through subtly enough but definitely adds depth to the flavours going on in the cupcakes.  They’re also surprisingly light.  I was initially going to make the recipe as one large cake, but after a stressful day I decided that cupcakes were the way forward since the piping bit calms me.  Don’t be put off if you don’t like Guinness – I cannot stand it as a drink, yet I can’t get enough of these cupcakes. 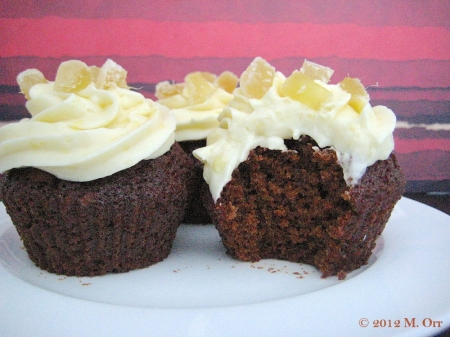 Makes 24
Adapted from Tea with Bea

To make the cupcakes:
1.  Add the Guinness and black treacle to a tall saucepan (it needs to be tall because the mixture will bubble violently in the next step, and you don’t want it to overflow) and heat over a high heat.  Remove from the heat once the mixture comes to the boil, and stir in the bicarbonate of soda (this is the bubbling violently bit).  Set aside to cool completely whilst preparing the rest of the cupcake mixture. 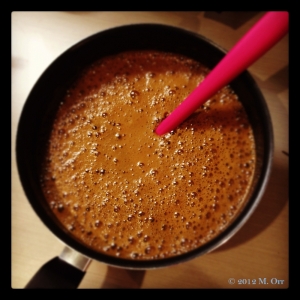 3.  Sift the flour, baking powder, spices and salt into a medium-sized mixing bowl and stir together.

4.  Peel the ginger and finely grate it, adding it to a large mixing bowl.  Add the eggs and two sugars and whisk together.  Make sure there aren’t any little clumps of brown sugar left, then gradually mix in the oil.  Whisk in the cooled Guinness syrup.

5.  Fold in the flour mixture with a spatula or spoon until just combined (it’ll be quite a liquidy mixture).

6.  Spoon the mixture into the the prepared liners or moulds, filling them about ⅘ full.  Bake for 25-35 mins until the tops are springy to touch and a toothpick inserted in the middle comes out clean.  Remove from the tins or silicone moulds and cool completely on a wire rack before icing.

To make the icing:
7.  Prepare a piping bag with your chosen piping nozzle (I used a Wilton 1M large star nozzle).

8.  Whisk together the cream cheese and butter in a medium-sized bowl with an electric whisk until smooth.  Sift in the icing sugar and add the vanilla extract and honey and whisk until light and fluffy.  Transfer to the prepared piping bag and pipe swirls onto the cupcakes.

9.  Chop the crystallised ginger pieces and sprinkle them over the cupcakes to decorate.