Tag Archives: Between the Sheets

Cocktail in a macaron: Between the Sheets

A few weeks ago, I happened across the recipe for a cocktail named Between the Sheets on the Cold Glass blog.  I have no idea who first named this cocktail, but they seem to have been in the cocktail-names-with-innuendo-are-far-more-amusing camp (incidentally, I totally share that view).  Or maybe they were just being hopeful, because the combination of white rum, cognac and Cointreau sounds potentially lethal to me.  But then Cointreau and I don’t always see eye-to-eye (particularly in the memory department), so perhaps that’s just a personal thing. 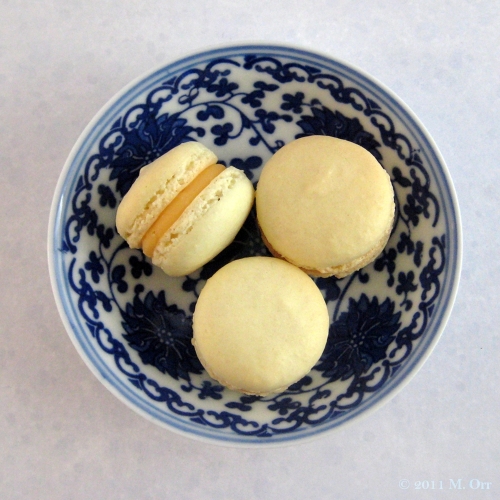 I think what intrigued me the most was the combination of ingredients in this cocktail.  I wasn’t sure how it would taste, but I decided that it sounded like something that could maybe work as a macaron…  So I attempted them the other day, and taste-tested them on Craig.  The unusual and rather unexpected combination of alcohols made pinning down the flavours rather tricky, not helped by the somewhat uneven distribution of the alcohols through the ganache (apparently I failed at mixing it properly after the addition of a little bit extra of each alcohol after taking the ganache off the heat.  Rookie error.) which resulted in each macaron tasting slightly different.  Luckily though, Craig enjoyed them! 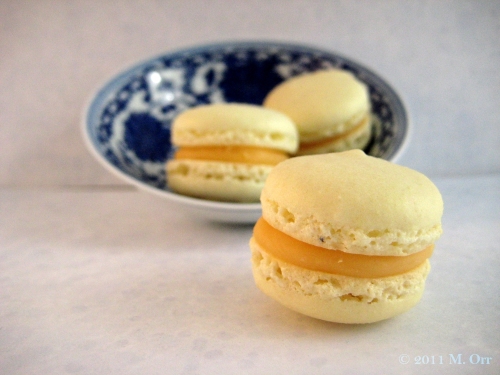 You may have noticed that I raided my mum’s collection of decorative dishes and chose this cute little Chinese dish to try and make my photos a little more interesting – what do you think?  Anyway, back to the macarons…  The combination of white rum, cognac and Cointreau sounds rather odd, but it does work, at least in macaron form.  The Between the Sheets macarons, although very sweet, are perfect if you’re looking for something a little unusual with a subtle range of flavours that complement each other unexpectedly well. 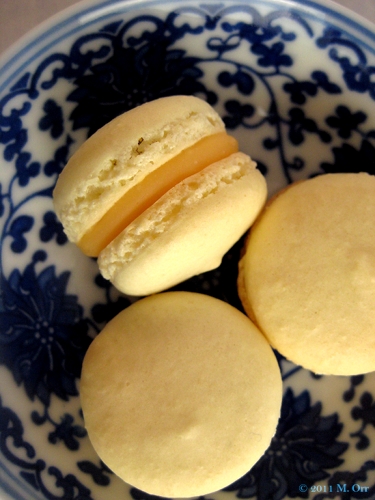 Between the Sheets macarons

Makes about 60 small macarons (so about 120 shells of 1.5/2 cm diameter)
Macaron shell recipe based on Mad About Macarons!
Ganache recipe adapted from Pure Gourmandise

As I only had waxed lemons I didn’t add any lemon zest to the ganache filling, but I think it would make a great addition.  Make sure you leave these at least 24h before eating them, in order to allow the ganache to soak into the shells a bit.  They can be stored in an airtight box in the fridge – just remember to bring them out at least 30mins before eating them, so that you can appreciate the flavour fully!

To make the macaron shells:
1. Line three or four flat baking sheets with baking paper and set aside.  Prepare a piping bag with a plain round piping tip.

2.  Blend the icing sugar and ground almonds together (don’t skip this step!)  Sift them through a medium sieve into a large bowl.  Sift them again if necessary.

3.  Make the French meringue by whisking the egg whites at room temperature (take them out of the fridge 2h beforehand) to glossy firm peaks, gradually adding the caster sugar.  Add a few drops of yellow food colouring paste just before the end and mix well (this is totally optional, but it just adds a bit of colour to the macarons, and it’s also kind of fun).

4.  Incorporate the French meringue into the dry ingredients using a large spatula and mix well.  Now work on the mixture by pressing down well with the spatula, going backwards and forwards, to press out the oxygen from the egg whites (this is the macaronnage stage), until you have a smooth mixture.  Don’t do this for longer than 5 minutes.  The result should be a soft and brilliant mixture that forms a “ribbon” on the spatula.

5.  Transfer the mixture to the previously prepared piping bag and pipe out the desired size of rounds (mine were about 1.5-2cm in diameter).  Press the nozzle right down on the paper and finish off with a flourish to obtain a nice round.  Leave a good space between them so they can spread out.

6.  Leave to set for about 30 mins (this helps to produce the feet).  Preheat the oven to fan-oven 160°C.  When you can feel that a skin has formed over the top, they are ready to go into the oven.

7.  Bake one tray at a time in the centre of the oven for about 8-10 mins (to see if they are done, touch the top – if there is a “wobble,” leave them in 2-3 mins longer).  Leave them to cool on the baking trays, and when they are completely cool, carefully remove them and pair them up by size.

To make the ganache filling:
8.  Whilst the macarons are setting and cooking, make the ganache filling.  Heat the cream, and as soon as it starts boiling, add the white chocolate (broken into pieces), the white rum, cognac, Cointreau, lemon juice and a few drops of orange food colouring paste (the food colouring is optional, but adds a bit of fun colour), and mix with a wooden spoon until smooth (don’t let it boil or you will boil off the alcohol and we wouldn’t want that now, would we?).  Allow the mixture to thicken in the fridge (or freezer if necessary).

9.  Once cool, use a teaspoon to deposit a good dollop of  ganache onto one shell of each pair.  Then place the partner shell on top, and use a slight twisting motion to squash the shell down onto the filling.

Tagged as Baking, Between the Sheets, Cocktail in a macaron, Cognac, Cointreau, Gluten-free, Macarons, White rum