A snack fit for a hungry hobbit

Happy Waitangi Day for yesterday to any New Zealanders out there – I hope you all enjoyed your day off and had the same beautiful weather as we did!  I was actually in the lab trying to fix up some of the cameras I need for my experiments.  It might not sound like the most thrilling way to spend a public holiday, but at least it didn’t require too much intense thinking and I knew that I’d be going for a lovely long swim once I got back.  Until a tsunami warning was put out after the earthquake in the Solomon Islands.*  Having to stay away from beaches and out of the sea thwarted my plans for a swim somewhat.  So instead,  I made a slight dent in the backlog of blog posts from the safety of our hilltop house.  Because blogging and exercise are totally interchangeable, right?

Today’s recipe dates back from Kat was visiting over New Year’s.  (What blogging backlog?)  I’ve previously mentioned that we went on a little trip to Hobbiton whilst she was here.  Neither of us survive day trips without some sort of snack to keep us going – much like any self-respecting hobbit, actually – so we decided to make some homemade granola bars to take along with us.  I have a jar of raisins permanently soaking in rum, so we decided to dig into that and throw some into the granola bars.  Because why wouldn’t you?  Adding rum to granola bars obviously means that we’re winning at life.

Oats, nuts and (rum-soaked) dried fruit all contribute to a good snack that keeps you going, and we added some dark chocolate chips just because.  We threw in some macadamia nut butter that I had loitering in my cupboard, which turned out to be a rather excellent idea.  If you don’t happen to come across some on offer at a farmers’ market, I’d suggest almond butter or even peanut butter (although peanut butter would have a much stronger flavour).  These granola bars are pretty soft so they may crumble a little with transport, but if you wrap them up well in baking paper, it won’t be a problem.

The great thing about these bars is that all the ingredients are easily changed – substitute different nuts, different dried fruit, more (or fewer) chocolate chips or crystallised ginger, etc.  If you don’t have macadamia nut butter (I only have some because I came across some at a farmers’ market), almond butter would work well, as would peanut butter (though peanut butter will have a stronger flavour).  I used manuka honey for the flavour, but use whatever you’ve got available (or a mixture).  Soaking the raisins in rum is obviously optional, but highly recommended (unless you’re making these for kids, obviously…).  The bars are best wrapped in baking paper to transport them (they won’t stick to the baking paper), and will keep well for a few days in an airtight container (they’ll probably last longer actually, but we ate them all…).

1.  Add the raisins to a bowl or jar and cover with spiced rum.  Soak for at least 1h, but the longer the better (top tip: I always keep a jar of raisins soaking in rum.  You know, for emergencies…).

3.  Add the oats and almonds to a roasting tin or lipped baking tray, stir and toast for 5-10 mins in the oven, until fragrant.  Leave the oven on.

4.  Meanwhile, add the butter, macadamia nut butter, brown sugar and honey to a large saucepan and melt together.  Once smooth, stir in the spices, then add the toasted oats, chocolate chips, chopped crystallised ginger and raisins.  Stir together until well coated, transfer to the prepared tin, press down evenly and bake for 30 mins.  Allow to cool fully in the tin before cutting into bars or squares.  Wrap in baking paper to transport. 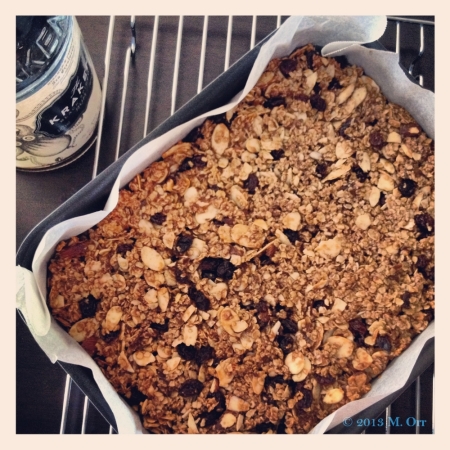 *The warning was eventually cancelled and no tsunami turned up, so nobody panic.