I read somewhere that some schools ban children from bringing in any food containing nuts in case some other child has a nut allergy.  Those poor deprived children who can’t have PB&J sandwiches for lunch!  (That’s peanut butter & jelly for anybody not as deeply in love with that particular lunchtime delicacy as I am.)  I know it’s unusual, but I’m not being sarcastic.  PB&J deprivation is not a joking matter.  I picked up my enthusiasm for PB&J whilst we lived in the USA when I was little.  So whenever I see PB&J-themed recipes, I prick up my ears…

By the way, when I refer to jelly in this post, I mean the American version of jelly, or what we would call gelée in French, not the wibbly-wobbly British version of jelly (which in the US would be called Jell-O…).  It really bugs me that there’s no British word equivalent – ‘jam without bits’ is just too wordy.  Anyway, my favourite jam (whether with or without bits) to pair with peanut butter is blackcurrant.  I’ve always adored blackcurrant jam, but now I love it even more as it always reminds me of making blackcurrant jelly with my mum and French grandma using blackcurrants from my grandparents’ garden.  But back to PB&J.  I came across a recipe for PB&J slices a wee while ago, and it’s been at the back of my mind ever since.

A little cupboard re-organisation session over the weekend unearthed more (unopened) jars of peanut butter than I’d care to admit to (I clearly did some serious stockpiling when there was a 2-for-1 offer on), so I decided it was time that the PB&J slice recipe had its moment.  A few tweaks later – I used my usual shortbread recipe for the base and, unsurprisingly, used blackcurrant jam – and some scrumptious PB&J slices made their way out of the oven.  The shortbread base is slightly crisp and crumbly, the jam gets all sticky and chewy from the baking and between the two is a tasty layer of slightly-salted peanut butter which counterbalances the rich base and sweet jam.  I also love the crumbled shortbread over the top – not only is it tasty, it makes the slices a little easier to eat, too.  I’m submitting these PB&J slices to this month’s AlphaBakes, which is being hosted by Caroline Makes, since the letter is “J” – J for the jelly (or jam) component of PB&J.  Not the most imaginative possibility for J perhaps, but definitely a yummy one!

Makes 20 slices
Adapted from The Boy Who Bakes

You can use either crunchy or smooth peanut butter – I chose crunchy for the texture, but smooth would probably be easier to spread.  By ‘natural peanut butter’ I mean peanut butter that literally just consists of peanuts, perhaps a tiny bit of oil and only a bit of added salt.  Likewise, using homemade blackcurrant jam would be ideal, but if you don’t have any, choose a good quality one with a high fruit content and minimal additives.  If you can’t find blackcurrant jam, raspberry, blackberry or blueberry would work as well.  These slices will keep in an airtight box for a couple of days.

2.  In a large bowl, cream the butter with an electric whisk or wooden spoon.  Slowly add the sugar and cream together until light and fluffy.  Sift the flour, cornflour and salt into the bowl and rub into the butter mixture using your hands until well combined (this may take a little while, but it will come together although it will still be a bit of a crumbly dough).

3.  Take ⅔ of the pastry and press it into the baking tin in an even layer.  Refrigerate for 15 mins.  Wrap the remaining dough in clingfilm and refrigerate as well.  Whilst the dough is chilling, pre-heat the oven to 180°C/fan oven 160°C.

4.  Bake the shortbread base for 25-30 mins until lightly golden around the edges.  Remove from the oven and allow the base to cool in the baking tin for 20 mins.  Keep the oven on.

5.  Spread the peanut butter evenly over the baked shortbread base, followed by the jam (try to resist the temptation to spread the jam right to the edge, because it will stick to the foil and make it really difficult to unpeel once the jam has cooled).  Crumble the remaining shortbread dough over the top and bake for a further 20-25 mins until the shortbread on top starts to colour lightly.  Allow to cool for 10 mins in the tin before transferring to a wire rack and peeling back the foil from the sides before the jam hardens (otherwise it will be impossible).  Allow to cool fully before cutting up into squares to serve. 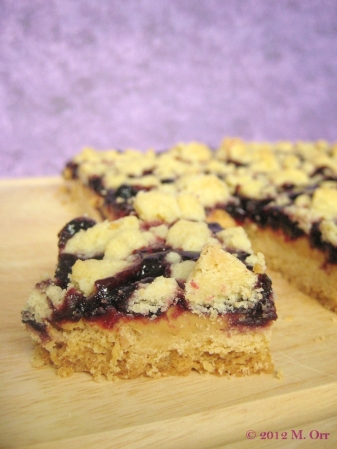