New Zealand’s most renowned dessert is probably the pavlova.  Incidentally, Australians also claim the pavlova…  Awkward.  You’d be surprised at the amount of argument that goes on between the two countries about who invented pavlovas, although both agree that it was to honour the Russian ballerina Anna Pavlova when she visited Australasia in the 1920s.  Since I live in New Zealand, I’ll run with the Kiwi version.  Now, I have a little confession: despite being here for eight months, I’ve never actually eaten a pavlova.  Shocking, I know.  The perfect opportunity to amend this terrible state of affairs came in the form of AlphaBakes, which is hosted by Caroline Makes this month.  The special letter is “P” – P for… pavlova.  No-brainer.  Since I’m upholding the Kiwi version of the pavlova story, I figured that I might as well go for the most appropriate-sounding topping possible: kiwifruit. 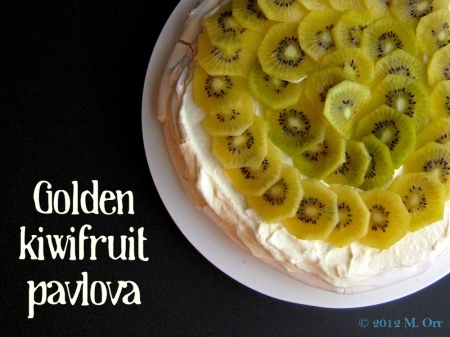 Now if you’re thinking that those kiwifruit are looking rather yellowish, then you’d be perfectly correct because I used golden kiwifruit.  I’d never heard of golden kiwifruit until I read my New Zealand guide book – I’d only ever come across the standard green ones before, and I have to admit, I’m not a huge fan of green kiwifruit.  But golden kiwifruit, oh my goodness, they’re delicious.  I’m a huge fan.  I find that they’re much more flavourful than their green counterparts, and sweeter, too, which I much prefer.  I buy a box nearly every week, and am building up quite a collection of kiwi spoons (plastic spoons with a cutting bit on the handle so that you can slice the kiwi in half with the knife part and scoop out the flesh with the spoon part – genius).

Kiwifruit are one of the few fruits in season at the moment (that I know of), so I’m also submitting this recipe to Simple and in Season, hosted by Feeding Boys and a Firefighter this month.  It’s also a super-simple dessert to prepare – literally just throw all the ingredients (ok, maybe not throw them, but place them) into a bowl, let the electric whisk do all the work and then pop it into the oven (the meringue, not the electric whisk).  Then just top with whipped cream and fruit and ta-da, you’re done!  Simple as.  Slicing it, on the other hand, isn’t quite as straightforward.  I mean, whoever thought that slicing a meringue would be a good idea?  I found it difficult to make a perfectly clean cut through the fruit, whipped cream and meringue.  I think little individual pavlovas would be far easier to serve, so I’ll try that next time.  Thankfully, shoddy slicing doesn’t affect the taste, and this golden kiwifruit pavlova was rather scrumptious.  Extremely sweet though, so a small slice was enough for me. 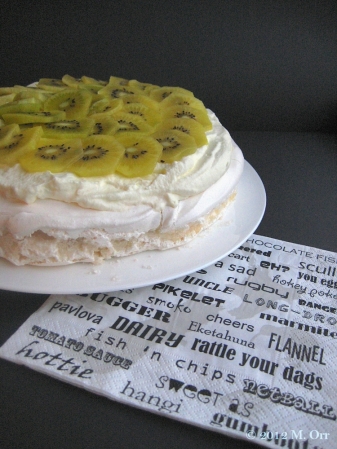 It’s very important for the mixing bowl and electric whisk beaters to be clean of any grease and thoroughly dry or the egg whites won’t cooperate.  If you’re not confident making meringue, age the egg whites in a jar in the fridge for a few days – this will increase the protein ratio which makes apparently makes the white whip easier.  The meringue will keep for a couple of days on its own so it can be made in advance the day before and then topped with the cream and fruit just before serving.  The pavlova won’t keep very well so is best eaten the same day.

To make the meringue:
1.  Pre-heat the oven to 180°C/fan oven 160°C and place a rack in the centre of the oven.  Line an baking tray with baking paper.  Draw a circle of 23cm in diameter in the middle of the baking paper and flip the baking paper over so that you can see the circle through it.

2.  Add all the meringue ingredients to a large bowl, adding the boiling water last.  Immediately whisk for 10-12 minutes with an electric whisk on high speed until shiny with stiff peaks.  Spoon into the circle on the baking paper and spread it evenly with a spatula, smoothing it as much as possible. 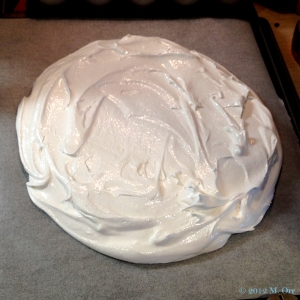 To assemble:
4.  When ready to serve, peel and slice the kiwifruit and set aside.  Carefully peel the baking paper off the bottom of the meringue and transfer to a serving plate.

5.  Whip the cream and icing sugar together until stiff and spread it over the top of the meringue, smoothing the top with a spatula.  Top with the sliced kiwifruit and serve immediately.