I don’t think I’d ever encountered tamarillos, also known as tree tomatoes, until about a month ago.  I certainly don’t remember seeing them in shops in Europe, although I’ve never looked for them, so perhaps I just didn’t notice.  Much like feijoas, another fruit I’ve discovered since moving here, tamarillos are originally from South America but grow well in NZ and are very popular here.  They’re in season from April to November, so I’ll be submitting today’s recipe to the Simple and in Season blog event, which is back home over at Fabulicious Food! this month.  Tamarillos look pretty cool inside with red skin, yellowy-orange flesh and black seeds.  Case in point (you may recognise these if you follow me on Instagram), although these ones have all been skinned: 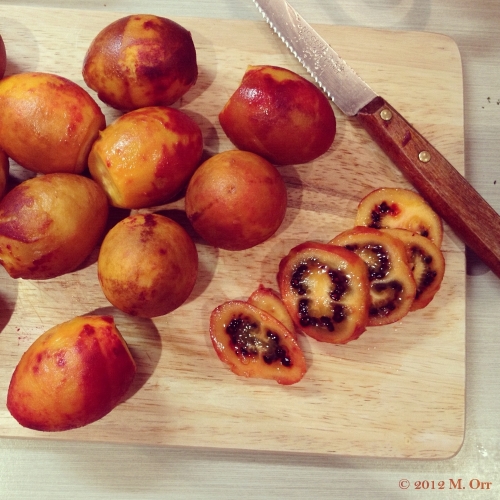 Pretty funky, right?  I first tried a tamarillo when one of my labmates brought a bag in from her garden several weeks ago.  Which is good because I wouldn’t really have known how to eat them or what to do with them otherwise.  They’re fairly bitter, so apparently they’re often poached in a sugar syrup before eating or very commonly used in chutneys.  That said, they are edible fresh, too, but I think that comes down to a matter of taste.  However you choose to eat them though, make sure to remove the skin because apparently it’s foul (I took everybody’s word for it).  Just cut them in half and scoop out the flesh with a spoon if eating fresh (the seeds are fine to eat).

Back when it was feijoa season, I borrowed several NZ baking books from the library since I didn’t really know what exactly to do with them.  Conveniently, said books also contained tamarillo recipes which, in a moment of foresight, I also noted down.  When I was browsing through them to figure out what to do with my tamarillo impulse buy from the farmers’ market, a recipe for tamarillo and walnut cake jumped out at me.  I freaking love walnuts so I was all over this recipe.  The only problem: it was a fairly brief recipe.  The ingredients listed ‘cooked tamarillos’ which didn’t help me much with my fresh tamarillos, but after consulting the internet and a little successful experimentation, I ended it up with cooked tamarillos, which then turned themselves into a rather scrumptious tamarillo and walnut cake.

The not-overly-informative recipe also failed to specify the size of cake tin to use.  Just a minor detail.  I clearly picked one that was a little too large so the cake ended up a little thinner than I’d have liked, but that’s really just a pernickety presentation issue and luckily doesn’t affect the taste.  Based on their bitterness, I wasn’t too sure how tamarillos would work out in baked goods, but actually the tamarillo flavour wasn’t quite as strong as I was expecting, and there’s no trace of bitterness whatsoever.  I love that the walnutty taste comes through really well, and is well balanced by the lemon icing.  Basically, I really enjoyed this cake (and so did the lab, my trustee taste-testers) and if you happen across some tamarillos and are unsure what to do with them, give this a go!  I’m also submitting this cake to this month’s AlphaBakes challenge which is being hosted by Ros at The More Than Occasional Baker.  This month’s random letter is “T” like tamarillo, which is a rather marvellous coincidence since I actually bought the tamarillos before reading the challenge.

Serves 6-8
Adapted from A fruit cookbook

Once the tamarillos have been cooked, do taste one to check that they aren’t too bitter.  If they are, drain them. sprinkle with a little sugar and sit for ten mins or so before using.  I used a 24cm cake tin but the came out much thinner than I would have liked, so I’d suggest using a 20cm cake tin, or even an 18cm one to get a thicker cake.  If using a 24cm cake tin as I did, do watch that it doesn’t over-bake.  The icing is optional, but adds a delicious touch.  You could also use a simple lemon drizzle icing if you prefer.

For the cooked tamarillos:
4 or 5 tamarillos (about 220g, gives about 200g when cooked)
½ lemon
2 heaped tbsp caster sugar (more if using red tamarillos)

To cook the tamarillos:
1.  Place the tamarillos in a heat-proof bowl and pour boiling water over them.  Allow to sit for 2-3 mins, then skin them, starting by lopping off the stalk with a sharp knife and peeling off the rest of the skin (the skin peels away very easily once started).  Slice the skinned tamarillos and place in a medium-sized saucepan with the sugar and lemon juice.  Add enough water to barely cover the fruit, cover the saucepan and gently simmer until the fruit is soft (this took about 15 mins for me).  Remove the cooked tamarillo slices and drain them well before chopping up (you should have about 190g cooked tamarillos).  Set aside.

3.  Roughly chop all of the walnuts and toast them in a frying pan over low heat until fragrant.  Toss frequently and be careful that they don’t burn.  Set aside to cool.

4.  Sift the flour, baking powder and spices into a medium-sized bowl.  In a small bowl, lightly beat the eggs with a fork.  In a large bowl, cream the butter and sugar together until fluffy.  Whisk in the eggs until well incorporated.

5.  Alternate between stirring in some of the flour mixture and some of the chopped tamarillos.  Then stir in the peel and 50g of the chopped toasted walnuts.  Pour into the prepared cake tin and bake for 1-1¼ h, until a toothpick inserted in the middle comes out clean (if using a 24cm cake tin like I did, start checking after 45 mins).  Leave the cake in the tin for 15 mins before turning out onto a wire rack to cool completely.

To make the icing:
6.  Once the cake is cool, make the icing.  Beat together the butter and icing sugar.  Once well incorporated, whisk in the zest and juice of the lemon.  Mix in the cream to reach the desired consistency.  Pour icing over the fully cooled cake, smooth if necessary using a palette knife or spatula and top with the remaining toasted chopped walnuts.