I have a tendency to bookmark recipes involving spinach. It’s a habit that I picked up in St Andrews, thanks to Kat. She’s on medication that basically limits the amount of alcohol that she can drink to about 2 glasses of wine a day. Which wasn’t ideal for dinner parties (because unfortunately the 2 glasses a day aren’t transferable to the next day if you haven’t consumed them). However, she also had to limit the amount of vitamin K because it has the opposite effect on the medication to alcohol. So clearly, if she ate more vitamin K, she just had to balance it with an extra glass of wine or three and vice versa… Spinach is jam-packed full of vitamin K, so whenever I had Kat for dinner, it was highly likely that spinach would feature at some point. I didn’t want Kat to have to feel limited to drinking less than everybody else, because that’s just not fair. Of course, the obviously sensible thing to do would have been for everybody else to cut down on the amount of wine being consumed… but as fourth year undergrads, let’s be realistic here. 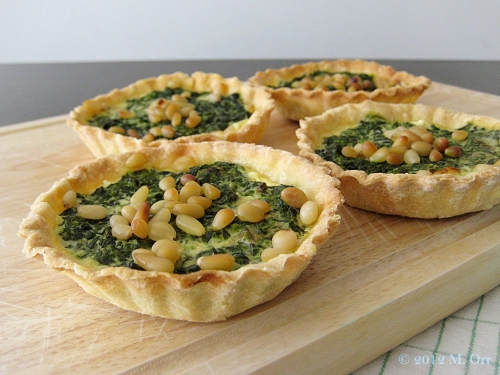 In fact, Kat was first prescribed this medication over the summer of 2010, which she unexpectedly spent living with me in St Andrews – this was the summer that definitely cemented our friendship. We spent a large part of the summer perfecting the amount of spinach required to balance out various quantities of wine and gin. We got it down to a fine art. This wasn’t quite as irresponsible as it sounds since Kat was conveniently having plenty of check-ups to check the levels of her medication throughout the summer. Kids: don’t read this and think it’s a smart idea to play Russian Roulette with your health, it’s not and that’s really not what I’m suggesting you should do. Rather hypocritical, I know, but I felt a disclaimer was probably a good idea. 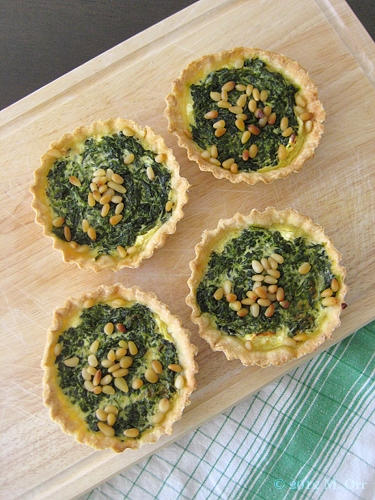 So anyway, as a result of this, I have lots and lots of bookmarked recipes involving spinach. This particular recipe is adapted from a wonderful little cookbook that Craig (who was also involved in many of the spinach vs wine/gin experiments) gave me for Graduation, so I never got around to trying it out before I moved from St Andrews. The original recipe has been bookmarked for a long time, partly out of habit, partly because it uses egg yolks (I’m always looking for recipes that use up egg yolks) and partly because it sounded delicious. And it turned out scrumptious, as I was expecting – I’ve tried the spinach and feta combination before, and have always enjoyed it. I decided to make these as mini quiches (or “quichelets” as I like to call them), as suggested in the book, but it would also work as a larger quiche, particularly if you want to make this as a main course rather than a starter or light lunch. 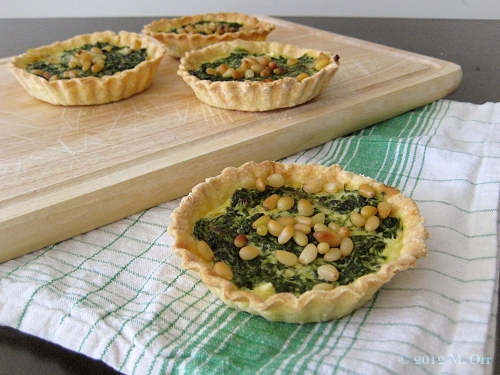 Serves 6 as a starter
Adapted from Baking – 100 everyday recipes

You could, of course, just make one big quiche, but making the mini quiches doesn’t take that much more time and effort (just the time to cut the pastry from the tartlet tins). A larger quiche will take longer to bake – I can’t give you a time estimate, so I’d suggest just monitoring it, and toasting the pine nuts in a small frying pan and just topping the quiche with them when it comes out of the oven. I always add a tiny bit of Dijon mustard to the bottom of all my savoury tarts and quiches because I find that it subtly heightens the flavours, but it is entirely optional. If you’re not a big fan of cheese, you may wish to reduce the quantity of cheese down to about 100g.

1. Grease and flour six 9 cm tartlet tins (or one large quiche tin). Divide the pastry equally into six and roll out each portion to about 4mm thick and line one of the tartlet tins. Prick with a fork and refrigerate for about 30 mins. Pre-heat the oven to 200°C/fan oven 180°C.

2. Line each pastry case with baking paper and fill with baking beans. Blind bake for 10 mins.

3. Meanwhile, in a small bowl, lightly beat together the egg yolks, crème fraîche and ground nutmeg. Season with salt and pepper (don’t be afraid to be a little heavy-handed with the pepper). Set aside.

5. Add a tiny dollop of mustard to each blind-baked pastry case and spread evenly. Crumble the feta and split evenly between the six tartlets. Stir the creamy egg mixture into the spinach, mix well, and spoon over the feta. Bake for 10 mins (if you’re making a large quiche, the cooking time will be a bit longer).

6. Sprinkle the pine nuts over the mini quiches and bake a further 5 mins.

7. Remove from the oven and serve immediately accompanied with a green salad or allow to cool on a wire rack. 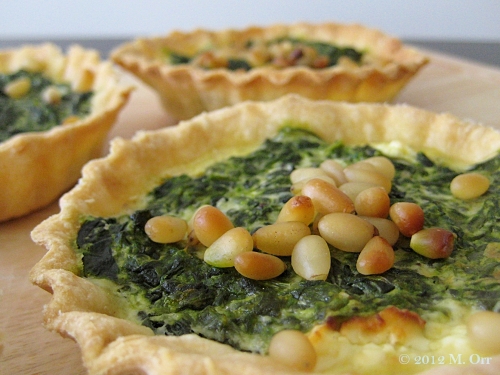 PS – Kat, I wish I could have shared these quichelets with you!

5 responses to “Spinach and feta “quichelets””