I was super-enthusiastic about the theme for this month’s Breakfast Club challenge, which is “Berries,” chosen by Nayna at simply.food.  Along with warm sunshine, summer berries have to be one of my favourite things about summer.  Fife seems to have a lot berry farms, and I think it might be one of the main raspberry-producing areas in the UK – with good reason, because the local raspberries are absolutely scrumptious.  So that’s one of my favourite summer things sorted.  As for sunshine, well, although St Andrews is apparently one of the sunniest spots in the UK, I still feel that the heat of a proper summer is distinctly lacking.  I suppose you can’t have  everything, and it would seem that local, tasty summer berries and a hot, sunny summer are too much to ask for.  So, as a whole bunch of clouds appear out of nowhere and the temperature drops to prove my point, let’s focus on the fruit. 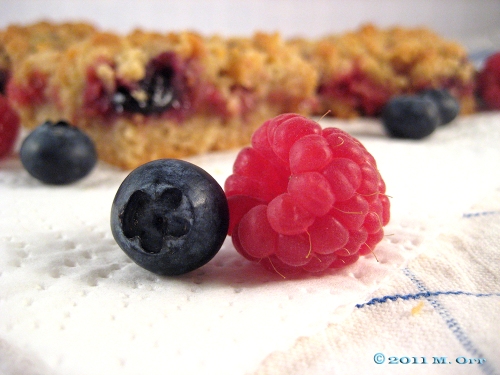 There are so many breakfast possibilities involving berries, and the first that sprang to mind were granola, pancakes or muffins.  I decided that I wanted to try something a little less obvious, particularly since I have time to try things out at the moment (and all those baking supplies that I need to work my way through).  I happened across a recipe for some fruity crumble bars the other day, and not only did they look super tasty but the recipe was easy to adapt depending on whatever fruit you want to use.  So I decided to try the recipe out last night, ready for breakfast this morning. 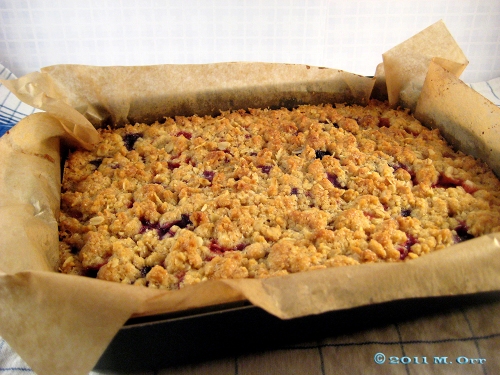 Since Tesco (my local supermarket) conveniently had a whole bunch of locally-grown berries at half price, I decided to make the crumble bars with a selection of berries.  I picked up some raspberries, blueberries and strawberries (they didn’t have any blackberries sadly) and headed home to attempt the bars.  In a vague attempt to make this slightly healthier, I added some porridge oats to the crumble mixture, which worked nicely, adding a little bit of subtle crunch.  I actually really enjoyed having these for breakfast, they’re filling and tasty and a little different from what I usually tend to eat for breakfast, but they would also work as a post-lunch or mid-afternoon snack if cut into smaller squares, although they’re quite crumbly and not necessarily all that transportable unless in a box. 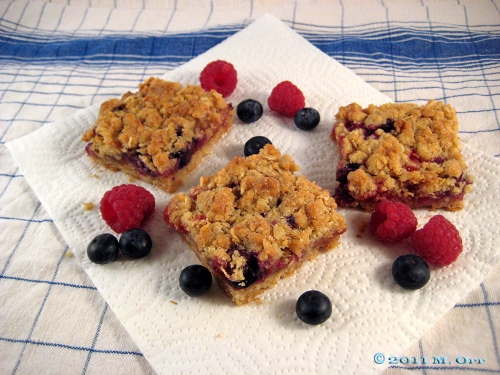 You can easily adapt these depending on which fruits you have at home or are in season.  You can also use whichever type of jam you want, and if you really like marmalade, you can also use that (I did, and it was yummy, though make sure to spread it thinly so the bitterness of the peel doesn’t overpower the rest of the bar too much!).  I was worried that keeping them overnight in an air-tight box would make them go a bit soft, but they were absolutely fine.

1.  Line a 19 x 25 cm baking tin with baking parchment (this will make it easier to lift out of the tin when cooled so that it can be cut into squares).  Pre-heat the oven to 175°C.

2.  In a small bowl, lightly beat the egg.  Cut the butter into small cubes and add to a large bowl with the flour, oats, sugar, beaten egg, baking powder, vanilla extract and salt.  Work the ingredients together using your hands to make a lumpy crumbly mixture (don’t worry if you think that the mixture is unlikely to turn into anything resembling the end product, or is a lot more buttery than a normal crumble mixture – this is normal).

4.  Bake for about 45 mins, until golden on top.  Allow to cool fully (it will harden up as it cools, which should take about 40-50 mins or so) before lifting out of the tin and slicing into squares. 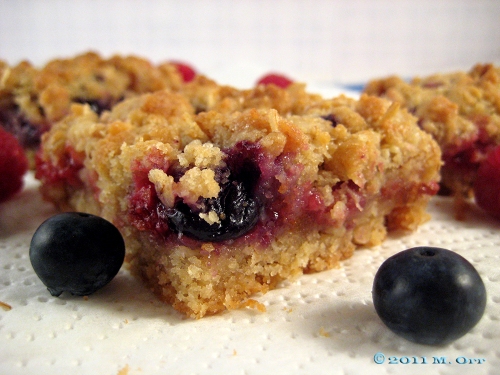