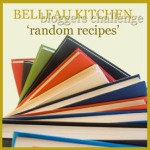 This month’s Random Recipe challenge is “Just desserts” – the recipe has to come from a book dedicated to desserts or baking, etc.  Or the sweet section of a normal cookery book.  I have several dedicated “sweet” cookery books, so I picked them out, and randomly picked one, which happened to be Le Larousse des desserts.  A lot of the recipes in it intimidate me because I just don’t think I’m a good enough cook to manage most of them successfully, so I was quite pleased with my random choice – whatever I ended up picking I would just have to try.  So out came the calculator and its random number generator, which directed me to… page  305.  Which happens to be in the soufflé section.  Great.  A bit like macarons, soufflés are notorious for being pernickety, and I would never normally attempt one (nobody ever wants to attempt a dinner party dessert with a higher failure than success rate).  But a challenge is a challenge, and I wasn’t about to back down.  Plus, the fact that I had to try it provided a good excuse in case it went wrong… 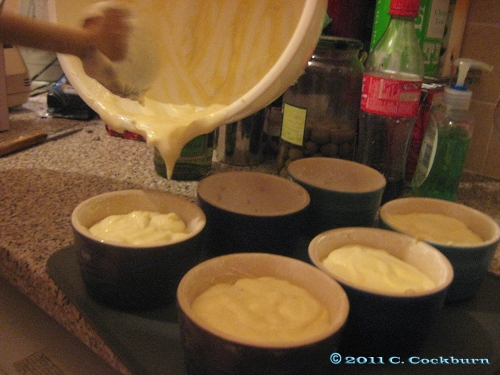 The wonderful thing about Kat and Craig is that I know that if I attempted a soufflé for them and it turned out a complete failure (highly likely), they wouldn’t judge me on it, we could drink more wine and everything would be fine.  Definitely reassuring, and clearly they were going to be the only witnesses to the attempt.  There were two options on page 305: chocolate soufflé and Chartreuse soufflé.  I actually burst out laughing when I saw the second option – Craig has been saying for most of the academic year that we have to make Kat try Chartreuse.  The choice was therefore an obvious one, and I attempted it last night, helped by Kat and Craig (thanks guys!). 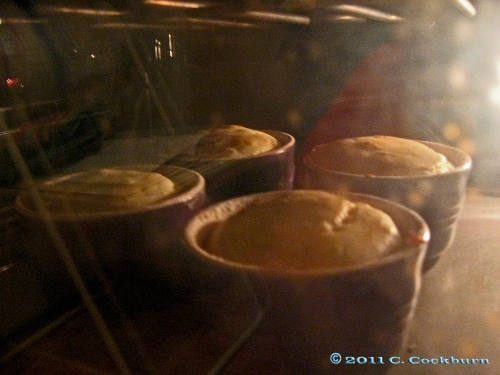 I could have actually used the title “How to stack all the odds against you when attempting a soufflé” for this post for the following reasons:
1.  I’ve never made soufflé and I feel first attempts of any kind of recipe are always more liable to go wrong.
2.  The recipe requires a soufflé dish of 16-18cm.  There are no soufflé dishes of that size anywhere in St Andrews.  I didn’t have enough time to order one online.  So I had to use individual ramekins, which meant adjusting the cooking times, but no indication was given in the recipe, so we were going to have to sit and just watch the soufflés and guess when they were ready.
3.  One of the ingredients (fécule) can be translated five different ways.  I chose to go with cornflour, because that’s what I had in my cupboard, but when I spoke to my mum the evening before the attempt, she reckoned it meant potato flour.  Not a confidence booster.
4.  My oven doesn’t heat evenly.  Not even close.
5.  By the time we got round to actually making the soufflé, we were all exhausted and had already consumed Pimm’s, G&Ts, wine, more wine and shots of Chartreuse.  A recipe for making mistakes, right there.
6.  Speaking of making mistakes, I accidentally used icing sugar instead of caster sugar.

Somehow, against all expectations, the soufflés worked!  I’m not sure how this happened, and I think it might be a fluke, but still, wow.  Granted, they weren’t all that presentable, but they tasted good, and considering I was expecting a total failure, that’s definitely enough for me!  So will I be trying soufflés again?  I’m not sure.  They’re not that practical to make for dinner parties, since they have to be timed to the minute and served immediately.  Perhaps savoury soufflés would be easier to deal with in that sense. 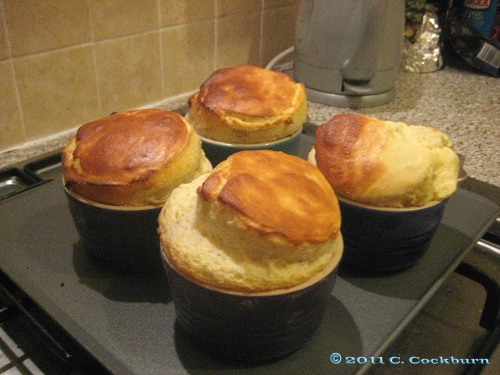 I’m giving the original recipe for a single soufflé dish, but I will also include the timings if you’re using little individual ramekins (I used 4 ramekins, but they were very close to being over-filled, so I’d suggest using 5 or 6 ramekins).  The recipe notes also suggest making this with Grand Marnier, and I’m sure most strong liqueurs would work.

1. Pre-heat the oven to 200°C.  Butter the soufflé dish (or ramekins) and sprinkle the inside and edges with caster sugar.  Separate the egg yolks from the whites, reserving both.

2.  Heat the milk and caster sugar in a saucepan.

4.  Melt the butter in a large saucepan.  As soon as it starts to bubble slightly, remove from the heat, add the cornflour and flour, and mix well before adding the vanilla sugar.  Return to the heat.

5.  Add the boiling milk to the butter and flour mix, and bring to the boil whilst stirring constantly.  Remove from the heat, and add the egg yolks, mixing well.  Pour in the remaining Chartreuse, and mix until smooth.

6.  Whisk the egg whites to stiff peaks, and once the Chartreuse mix has cooled enough, add the egg whites and gently fold them in, taking care not to break them.

8.  Bake in the oven at 200°C for 5 minutes, then turn the temperature down to 180°C for a further 25 minutes (or for a further 15 minutes if using small ramekins – you can tell they’re when the tops of the soufflés are golden brown), making sure not to open the oven door at any point.  Serve immediately. 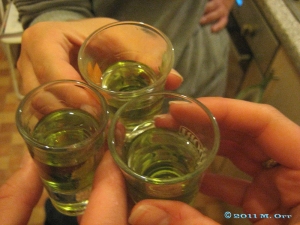