Before I launch into this, I feel I should add a disclaimer that I’m not a professional reviewer of any description, and these are just my rambling thoughts.

If you’re familiar with St Andrews, you are probably aware of the I.J. Mellis cheesemonger on South Street (they also have shops in Edinburgh, Aberdeen and Glasgow).  The cheeses that they stock are all of very good quality, but I find that the choice isn’t nearly as extensive as it could be, and having been here for nearly four years, I’ve thoroughly exhausted their selection.  Many times over.  As well as the limited and rarely-changing selection, there are very few exciting or unusual cheeses on offer.  There is the exception of Mont d’Or, which Mellis HQ appears to think is a Christmas cheese (whilst it is seasonal, it is available from September to April), and the brief appearance of Morbier back in third year, also labelled as a Christmas cheese (which it most certainly is not, as it is produced year-round), which are both two of my favourite cheeses.  But aside from those, the selection is rather… dull?  Now, of course, small shops can’t stock every single cheese under the sun, but that doesn’t stop them from stocking new cheeses from time to time.  The staff are all friendly, and from talking to them, I feel that this is more of an issue that stems from Mellis HQ rather than the St Andrews branch itself, but it’s an issue all the same, and I’ve been feeling a bit dissatisfied for a while.  I must admit, I also miss the Manager/Assistant Manager combination of Finn and Zak, who were always up for a good chat (though it did mean that buying a slice of cheese took about half an hour) but have both left.

As a massive fan of cheese, I used to drop in at least once a week, usually for myself, but regularly on French Society business, too, and I was definitely a loyal customer, though customer loyalty was a bit of a default with only one cheesemonger in town…  You may have noticed the switch to past tense – Mellis is definitely still up and running, but I’m no longer a loyal customer.  So what happened?  Well, Mellis is no longer the only cheesemonger in St Andrews – a new cheese shop has opened!  I’m ashamed to admit that it took me about two months to venture into The Guid Cheese Shop, but when I (eventually) did, wow, what a wonderful surprise!

I think the first thing that I said (after “hello,” obviously) to Svetlana, the super-friendly proprietor, upon entering the shop was “oh my gosh, you sell Morbier!!”  In the moment that I saw that beautiful piece of cheese with its trademark black charcoal line running through it, a good part of my customer loyalty to Mellis evaporated.  Most of the rest of it was dispelled by the wide selection of French cheeses sourced from small producers, which I may have gotten slightly over-enthusiastic about.  I’m pretty sure Svetlana thought I was bordering crazy when I got so excited about all the different varieties.  Since then, almost every time I’ve dropped by (which is fairly often, as we’re using The Guid Cheese Shop to supply the cheese at the next French Society Wine & Cheese evening), Svetlana has a new cheese to try, or that she’s thinking of ordering in.  You can tell straight away that she is passionate about cheese (who isn’t?!), and has put a lot of work into sourcing interesting varieties, and different cheeses to the relatively well-known ones stocked by Mellis.  Of course, she also stocks very good Roquefort, Brie and Comté, but it’s the artisanal cheeses that have me completely sold.  I should say that I’m mostly basing my opinion on the French cheeses on offer, as I’m most familiar with them, and feel comfortable sharing my thoughts about them. 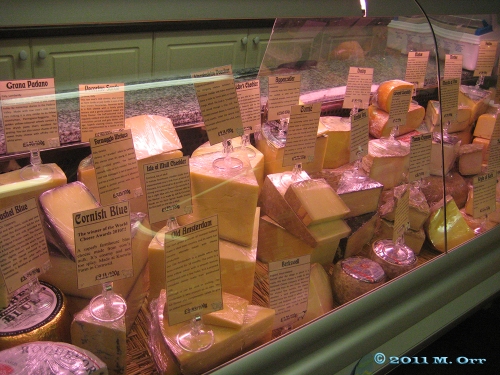 I’ve already mentioned that Svetlana is clearly passionate about cheese, and I think the best illustration of that is that she’s been putting on Cheese tastings and courses in the shop, as a way of introducing people to different varieties of cheese.  Now, as a cheese enthusiast, if there’s any event involving cheese, I’m so there.  An event involving cheese and wine, well, you’ll have difficulties keeping me away.  Although, not only am I a cheese fiend, but I’m also a snob, so it has to be good cheese and good wine.  Due to previous commitments and so on, I was unable to go to the first few cheese evenings, but Craig and I went along to the Cheese & Wine course on Saturday evening, which was also a launch for the range of wines that are now also sold (sadly Kat couldn’t make it).  We may have dropped the average age by about 20 years, but it was a great evening (and inspired me to write this post about the shop).  Svetlana’s knowledge and enthusiasm was evident, but I think what really shone through was her obvious wish to simply introduce people to the wide variety of cheeses that are available.  She was actually telling me earlier today that she has written a book in Russian to explain various cheese-making techniques and types and introduce some of the more artisanal and lesser-known cheeses to Russia, where during and after the Soviet Era, the only cheeses available were industrially-produced.  That is amazing dedication to the cause of good cheese!

Whilst the staff at Mellis are also clearly passionate about what they do, I feel they are somewhat limited by Mellis HQ, which deals with all the orders and stocking of the various shops – I get the impression that they are not a fan of change, or if they are, apparently this is not filtered down into the St Andrews shop.  Perhaps if Mellis were more innovative in their cheese varieties, they would be able to compete with the Guid Cheese Shop, but as it stands, I really don’t think that they can.  A cheesemonger should have the standard favourites, but also always have new varieties for customers to discover, so that they don’t get bored.  And that’s exactly where Mellis falls down – I’m thoroughly bored with their stock.  I can only hope that Svetlana at the Guid Cheese Shop continues to source out small producers and lesser-known cheeses.  If so, then combined with her passion and enthusiasm for educating people about cheese, I definitely think she’s onto a winner!

Since I will (in theory) be graduating and sadly leaving St Andrews this summer, I will only be able to follow the progression of the Guid Cheese Shop from afar, though I do hope that the discount that she has given French Society members (15% off cheeses – one of the many reasons to join French Society!  Shameless advertising over…) will contribute positively.  So if you are in St Andrews, do take the time to drop in!

That turned into a mini essay.  Woops.  I blame the dissertation (I currently can’t write anything in less than 1000 words and just end up repeating myself several times over). 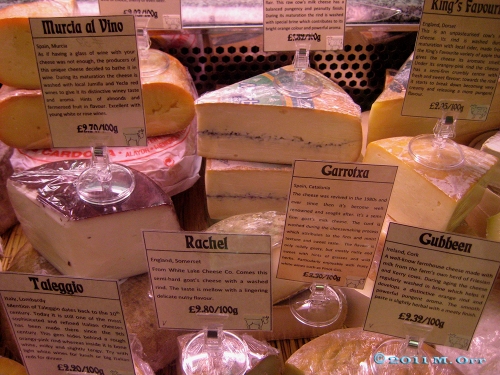