Today is the first Tuesday of April, which means that it’s Zoosday Tuesday, and I’m excited about the cake that I’m about to share with you…!

I’ve just realised that I could have done a Cakes for Craig mini-series of posts – last week I told you about the Gin & Tonic macarons that were his birthday present, then on Sunday I shared the chocolate délice that I attempted for his birthday dinner.  Today is the final installment (so I guess that makes it a trilogy?): the surprise cake that Kat, his housemate (who I shall call H for now, as I forgot to check if I could use her name) and I made for his birthday party, which was about ten days ago.  Kat and I previously ventured into the world of animal-themed cakes back in January with a seal pup cake.  We had so much fun that we wanted to make another animal-themed cake.  Now, Craig loves meerkats, so this is the cake we made for him… 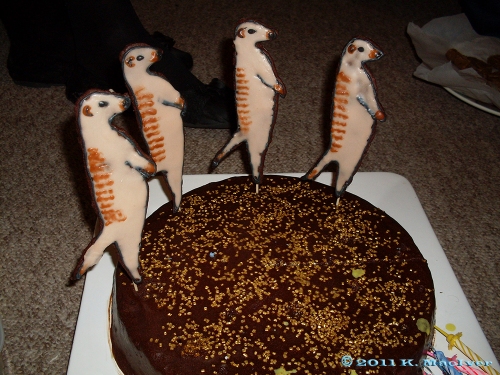 Here’s a little secret: Kat and I have actually been planning this since January.  Before you accuse us of having too much time on our hands, let me just say that it’s amazing the amount of procrastination you can get out of designing a cake (and we’ve had a lot to procrastinate from – exams, review essays, practical reports, our dreaded dissertations…).  H helped us make it, and most importantly, was in charge of hiding it from Craig so that it would be a total surprise.  Since we didn’t want to arrive at the party with the cake, thus giving the game away, we took it round whilst he was out and H did a brilliant job of hiding it, because he clearly had no idea.  SUCCESS!!! 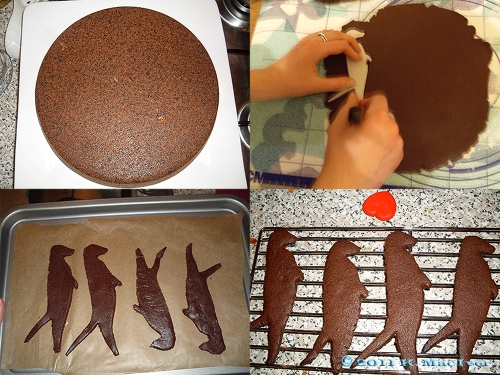 The cake itself was straightforward enough – we used the same chocolate cake and glaçage as the seal cake, but sprinkled it with gold sugar to resemble sand (meerkats live in the desert).  In keeping with the general chocolate theme, the meerkats were chocolate rolled cookies.  We scoured the internet for meerkat cookie-cutters, but to no avail.  Which is surprising, considering the whole meerkat craze at the moment.  I mean seriously, I have a shark cookie-cutter – do they really make shark cookie-cutters and not meerkat ones?!  It would appear so.  Astounding.  Anyway, I digress.  So Kat drew out a stencil instead and we used that to cut out the cookies by hand.  The icing was originally going to be a straightforward (American) royal icing, but well, we’re students, and this was a birthday party, so the obvious thing to do was to lace the icing with kirsch (to go with the kirsch in the cake and in the cookies, the recipe of which we’d already altered to include some kirsch).  And by lace, what I really mean substitute kirsch for water.  We then used some edible glue to attach toothpicks to the backs of the meerkat cookies to so that they would stand up on top of the cake (this also made it easier to transport because we just stuck the meerkats into the cake once at Craig’s).  The cake was served with kirsch-infused whipped cream, well, actually, I may have surpassed myself and accidentally made cream-infused whipped kirsch (oops). 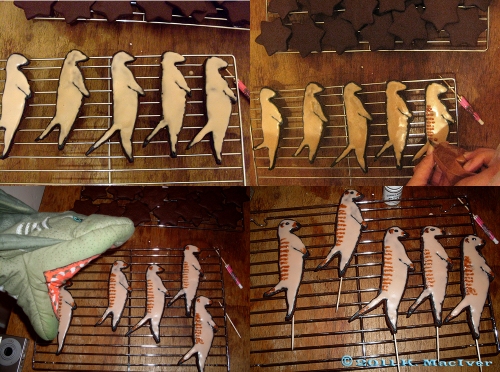 Getting the whole cake together took us about six hours.  But the cake nearly rendered Craig speechless (quite a feat) and he clearly deeply appreciated it, which makes the effort totally worth it (and we had so much fun with the icing).  He actually mentioned it in the sweetest post, and after a recent episode of somebody very obviously not eating a cake that I made them (despite it being tasty according to everybody else who tried it), cake appreciation means a lot to me.  I have to admit, I’m still amazed at how realistic we managed to make the meerkats, so here’s another photo (all photos thanks to Kat, by the way): 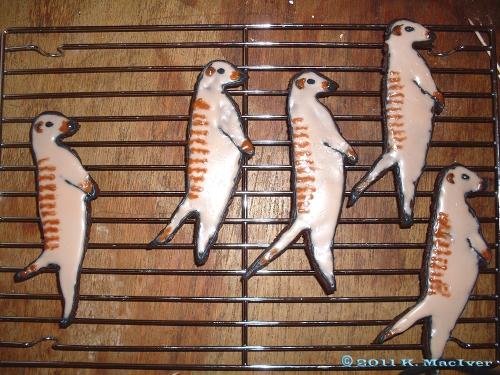 If you want to make the whole cake, then follow this chocolate cake and chocolate glaçage recipe, and sprinkle gold sugar over the top of the cake before the glaçage hardens (so that it sticks to the cake). The cookie dough makes a lot of cookies – we only made 5 meerkats but we used the rest of the dough to make star cookies.  Luckily the dough freezes quite well in a zip-lock bag, just thaw it out in the fridge before using it (otherwise it will be too hard to roll out).  The icing would make enough to decorate at least 8 meerkats.

To make the cookies:
1.  Sift the flour, cocoa powder, bicarbonate of soda and salt together into a bowl, and mix them together.

2.  In a large bowl, cream the butter and two sugars together using an electric whisk, until light and fluffy.  Mix in the egg, chocolate liqueur and kirsch.

3.  Gradually add the cocoa powder and flour mixture to the butter mix roughly 100g at a time, making sure that it was been well incorporated before adding the next 100g (the mixer may slow up a bit towards the end).

4.  Once fully incorporated, split the dough into two or three balls (this makes it more manageable to work with later on), and put each into a zip-lock back and chill in the fridge for 1-2h or about 20mins in the freezer (don’t forget about it in the freezer or you’ll have to let it thaw out after).

5.  Pre-heat the oven to 175°C.  Line a few baking trays with baking paper.  (This is a good time to make stencils if that’s what you’ll be using.)

6.  Remove one ball of dough from the fridge (if you’ve chilled the dough in the freezer, move the other balls to the fridge so they don’t freeze completely) and place it on a lightly floured surface.  Place a piece of baking paper over the top of the dough (this minimises the amount of flour that you have to use) and roll out to a thickness of around 4mm.  Use cookie cutters (or cut around the stencil you’ve made) to cut out the cookies and place them on the baking trays.  Make the excess dough back into a ball and roll it out again, making sure that the surface you are rolling it out onto is lightly floured.

7.  Once you’ve got a full baking tray, chill it in the freezer for 5 mins (to help the cookies keep their shapes), then place it directly into the oven and bake for 7-10 mins (this will depend on the thickness and shape of your cookies).

8.  Allow the cookies to cool on the tray for a few minutes before transferring to a wire rack.

To decorate the cookies:
9.  As the cookies are cooling, prepare the icing.  Set out small bowls or tupperware boxes for the number of different colours you need (we had two – one large to make the icing in, and a small one in which to mix the black), and prepare the tips and icing bags that you will need (we used a Wilton #2 for the lining, a syringe for the flooding, and a Wilton #5 for the brown stripes and shading).

10.  Using an electric whisk, beat the egg white and 1 tsp of kirsch together until just mixed, before adding the sifted icing sugar.  Whisk until smooth and the correct consistency for lining the cookies.  If the icing is too runny, add a little more icing sugar.  Pour as much of the icing as you need into one of the bowls, and cover the big bowl so that the rest of the icing doesn’t dry out.  Add some black colouring to the small bowl and mix well (add more as necessary).  Spoon the black lining icing into a piping bag with a thin tip and outline the cookies.  You can extend the lining to define the paws, too.  Once done, put the icing bag aside, in an airtight box if possible – it will be required later for the eyes and nose.

11.  As the black lining dries on the cookies, prepare the flooding icing.  Uncover the large bowl of icing, add 1 tsp and mix well.  Add another 1 tsp of kirsch and mix well once again.  Continue adding a little bit of kirsch at a time until the icing is of the correct consistency (scoop some icing out of the bowl and drop it back in – it should disappear within 5s).  Add a tiny amount of hazelnut colouring and mix it in well, to achieve a beige colour (add a tiny bit more if necessary – err on the side of caution with quantities as it’s easier to add a tiny bit more than it is to remove any!).  Once the correct colour is achieved, spoon about ⅔ of the beige icing into a piping bag (or syringe) with a medium-sized tip, and cover the rest of the icing so that it doesn’t dry out.  Flood the cookies within the lining, using a toothpick to spread the icing as necessary.

12.  Once the cookies have been flooded, add more hazelnut colouring to the remaining icing and mix well to make a darker brown (you may have to add a sliver of black colouring, too).  Once the correct shade of brown is achieved, spoon the icing into a piping bag with a small tip (but not as small as for the lining), and pipe on the stripes on the back.  Each stripe consists of 3-4 dots, joined together with a toothpick, and mixed a little to make them less defined.  Add a few dots at the end of the tail, paws and around the nose, and blur them slightly with a toothpick.  Draw ears, too.

13.  Get the icing bag with the black icing back out again and draw the nose and eyes.  If you’re feeling adventurous, you can always add a tiny bit of shading to the ears with a toothpick.  Allow the cookies to dry a little before attaching the toothpicks to the back using edible glue and a fine paintbrush. Be careful when handling the cookies (to avoid smudging the icing)!  Allow to dry fully (this may take several hours) before decorating the cake or storing in an airtight box.